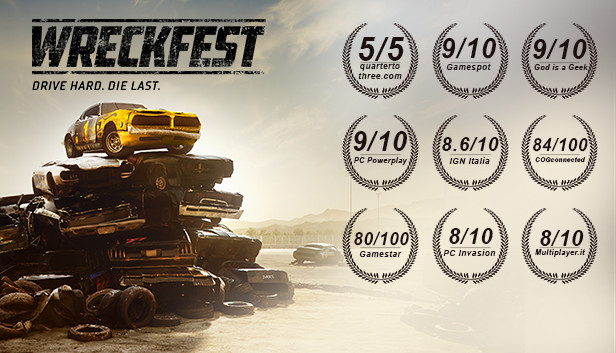 Expect epic crashes and tight, neck-to-neck fights over the finish line on run-down racing tracks. Expect proper demolition derbies. Expect brand new ways for metal to bend and the signature once-in-the-lifetime moments that can be achieved only with true-to-life physics simulation.

First and foremost, we’re building a FUN racing game with PERSONALITY. It’s all about the stuff that really matters: varied tracks, cool cars, and the defining once-in-the-lifetime moments that can be achieved only with true-to-life physics simulation. If you’re familiar with our previous games, you already know what we’re aiming at: exhilarating racing action with sophisticated physics and damage modeling, only this time we’re upping the ante on almost every front. This is the game we envisioned way back in the early 2000s, only re-imagined for today’s technology and gaming standards.

The cars are old, cheap, banged up, patched together, rusty… just awesome! In short, our cars ooze with STYLE. You won’t find anything like them in other racing games. We’ve got variety, as well: everyone loves the old American heavy-hitters from the muscle car era, but we’re not neglecting the fun little European and Asian cars from the long-gone decades either. The best part is that you’ll be taking them apart and building them back up again in your garage; the career is as much about your garage and your project cars as it is about racing.

Our in-house ROMU engine is a hell-bent beast that's precision-engineered for high-speed, breakneck racing. We have also already implemented fully deformable soft body car damage, meaning that the cars will react to damage in a very tangible, convincing way. While we're focused on action, motorsport authenticity is not forgotten, either. To that end our engine is simulating vehicle dynamics in a very sophisticated fashion. Rolling resistances, casters and slip angles are definitely not ancient Greek to us, and you as the player will be the one benefiting from our expertise.

The current Early Access release contains four playable cars and a number of tracks, showcasing both white-knuckle track racing and explosive demolition derby action with 24 cars that will give you taste of things to come. During the coming months we’re going to give the game a lot of polish as well as implement many new exciting features, and all Early Access supporters have a unique opportunity to get involved in the development of the title!

We’ve also giving a playable Technology Sneak Peek 2.0 to all our Early Access supporters. The sneak peek features a playground that we use internally to test various features various like car damage and environment destruction. Version 2.0 includes new destructive machinery, more dynamic stuff to blow up, spectacular stunts and an awesome physics cannon that we use to play with our physics engine. With the physics cannon you too will now have a chance to cause mayhem to heart’s content by launching missiles, throwing stuff around and destroying the environment as well as the cars!

Wreckfest is currently in early Pre-Alpha stage, and the Early Access version is going to serve as a basis on which we will continue building the game based on your feedback on what works and what doesn't. Throughout the Early Access phase we're going to gradually add more content and new features to the game, with some of the most important key features planned being:

Please note that all features mentioned here may be altered or removed during the development of the title if deemed necessary.