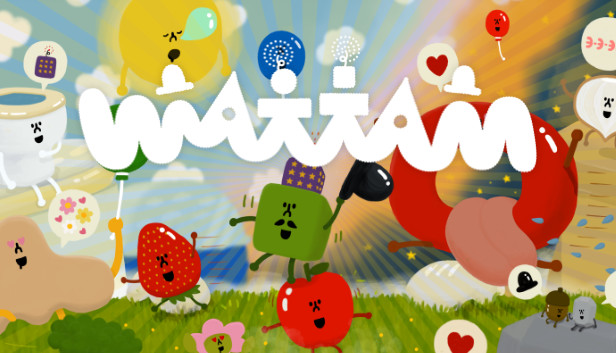 Wattam is a game about the joys of friendship and discovery, from the imagination of Keita Takahashi (creator of Katamari Damacy and Noby Noby Boy) and developer Funomena.

In Wattam, more than 100 wacky and carefree characters are waiting to be unlocked and become your friends, from sushi to seashells, and gigantic trees to normal-sized toilets. The Mayor will be your tour guide through this whimsical world, as you dance, chase, climb, stack, float, explode and hold hands through all the fun.

A Game for Everyone

Play solo or co-op on the same screen with friends (parents and siblings count, too). You can pop in and out of multiplayer mode, so the choice is yours. The adventure takes place through all four seasons - Spring, Summer, Autumn and Winter - so there's always plenty to do and discover, whether you're playing with pals or making new friends in Wattam.

Wattam is the ultimate goof-around simulation. See what kinds of silly things happen when you push the limits of the game's physics and animations to create crazy and comical results. Solving puzzles, uncovering secrets and playing mini-games has never been weirder or more wonderful. The sheer multitude of friendship combinations and hijinks means there's always fun in store.

The legendary creator of Katamari Damacy and Noby Noby Boy makes his long-awaited return to video games with Wattam, a dream-like sandbox adventure that has been in development with Funomena since 2015. In Wattam, Takahashi’s familiar themes of quirky creativity and inventive puzzle-solving combine with a zest for zany friendship interactions. Smiles are guaranteed.