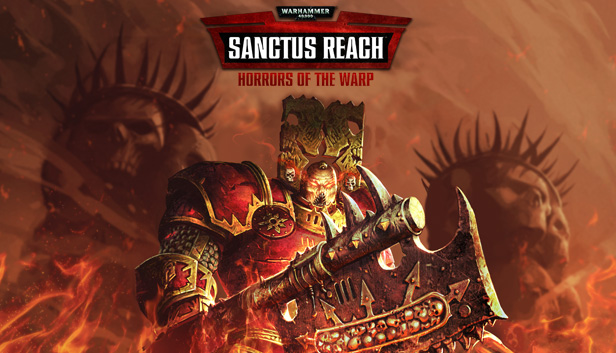 Hunted by the Adeptus Astartes, the Ork Mogrok has made a desperate gambit: he has opened a warp rift on Alaric Prime.

The planet plunges into new depths of madness as war rages on. Hordes of Chaos Daemons pour in from the rift, threatening to sweep over the Sanctus Reach system. Only the Space Wolves stand tall before the chaotic tide, the last bastion of the Imperium. Should they fall the whole system will be lost and all the blood that has been spilt so far will be for nothing.

This is why they won’t relent. They will fight in the name of the Emperor with tooth and claw in a feral maelstrom, back to back with warriors of legend. This is how sagas are born, in blood and chaos.

Warhammer 40,000: Sanctus Reach is back with a new expansion. You will lead the Space Wolves in the last chapter of the Sanctus Reach campaign: Logan Grimnar’s chapter will once again show its valour in a 16 scenarios single player campaign. In the Horrors of the Warp campaign you will have to face a new dangerous threat: Chaos Daemons. You will need to adapt and tailor your tactics to face this implacable new enemy.

Chaos Daemons have also been added as a new playable faction in Skirmish, with many new units each devoted to a different Chaos god! Servants and champions of Nurgle, Slaanesh, Khorne and Tzeentch are ready to swarm over Orks and the Imperium alike, with new mighty abilities derived from the Warp. Hordes of Bloodletters, crazy Chaos Spawns, fetid Plague Drones, and infernal Soul Grinders… the pits of Chaos are deep.