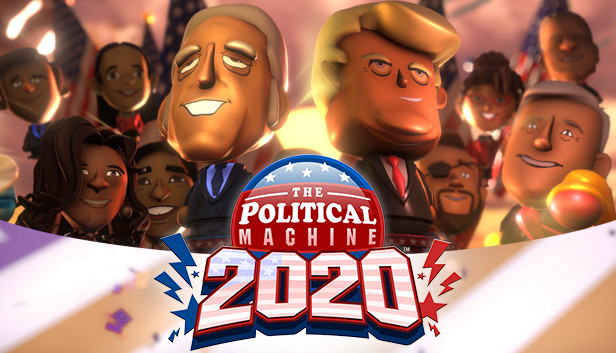 Win the hearts and minds of America’s voters and take the 2020 presidential election by storm in this exciting political strategy game. Candidates include current Democratic front-runners like Joe Biden, Elizabeth Warren, Bernie Sanders and Pete Buttigieg, as well as Internet favorites such as Andrew Yang and Tulsi Gabbard. Republican candidates include Donald Trump, George W. Bush and Mitt Romney. Players can also design their own candidates to take on the campaign trail and give their opponents a real run for the White House.

The Political Machine 2020 features brand new unique ideology trees for the candidates, which allows them to play very differently from each other. Throughout the game, you’ll visit Town Halls to gain ideology points that you will be able to spend to own certain issues. For instance, Bernie Sanders has ‘Medicare for All’ as an issue he can own, while Donald Trump can use points to purchase the ‘Build the Wall’ issue.

Each issue is modded on a per-state basis with their voter support based on data in order to allow for an accurate simulation of how those issues will play out in different states. It’s important to win 270 votes in the electoral college, so you’ll need to pay attention to what issues voters care about in the swing states. What plays well in Texas or California might hurt you in Ohio or Florida.

The Political Machine 2020 is a complete rewrite of the original version with vastly improved graphics and a more sophisticated simulation that combines polling data, voter enthusiasm, and the most recent US census results to deliver a game that is both fun to play for casual players, and realistic enough for political wonks.

Do you think you have what it takes? Take to the campaign trail and show the nation why you should be the next President of the United States of America!