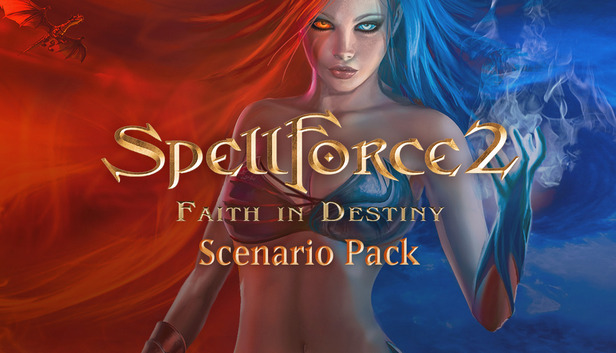 Buy all three Spellforce 2 Faith In Destiny Scenarios and get them automatically as they are released on Steam:

Order Master Matricus has recorded his secrets of fire magic in a Fire Ledger a powerful artifact. This compendium grants its owner the powers of fire magic. But the orcs have stolen it. Flink McWinter, a famous thief and scoundrel from the SpellForce universe, was hired by Matricus (or so he claims) to steal back the Fire Ledger. He quickly realizes that this will unfortunately not be an easy task, even for a master thief such as he...

Ever since Amun Kar invented the game of stones Drakkar, there has been a legend of the golden fool, a stone that was created only once, and defeats every other stone. After Carla was defeated in Shadow Wars, she risks everything to find that stone to regain her reputation as Drakkar champion. The search begins in the Tuscari Desert, but she soon realizes that she isn't the only one looking for the fool. A bitter battle for the golden fool soon arises...

Professor Twiddle is on a mission of exploration in Dun Mora. When his journey becomes too dangerous, he brings the parts for the Twiddlium Compensator to Queen Sansha for safekeeping. To be absolutely sure, he also informs Professor Undergant and tells him of his plans.

The Nameless launch their attack on Dun Mora, as mentioned in Faith in Destiny. The elves withstand the first wave of attacks. But it soon turns out that these attacks have a new dimension. So far, all they know is that the attacks come at certain intervals. Play as Caine and help the elves and Queen Sansha to defend their land against the Nameless!