Sins of a Solar Empire®: Trinity 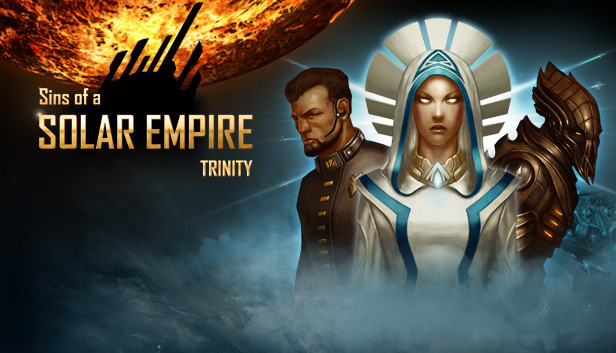 Sins of a Solar Empire - "The independent Trader Worlds must unite to defend themselves against the return of their exiled brethren - 'The Advent' and the arrival of the desperate remnants of the ancient Vasari Empire."

Sins of a Solar Empire: Entrenchment - "After nearly 15 years, the war which raged across dozens of star systems is nearing a stand-still. The great fleets of the Trader Emergency Coalition, the Vasari Empire and the Advent are near stalemate. With the fronts temporarily stabilized, there is time to regroup, and entrench. Great defensive battlestations are being deployed and critical choke points fortified. Will this buy the TEC, Vasari or Advent enough time to organize an all-out offensive?"

Entrenchment is the first micro-expansion for Sins of a Solar Empire, adding new structures, new technologies, and numerous other improvements to one of the most popular and award-winning PC titles of 2008.

Explore entirely new strategies with new units like starbases, mine layers, and defense busters and brand new research technologies to customize and improve them. Each race relies more on their unique strengths than ever before, resulting in new defensive options and the necessary evolution of new offensive strategies.

Sins of a Solar Empire: Diplomacy - Plagued by the continuous war, the factions have become weak and begin to seek refuge in the amiable sub-factions of their enemies in an attempt to find some solace.

The Vasari fear the worst, as they know all too well that the end is near for their race if something radical isn't done within these fleeting moments.

Members of the TEC notice a change in their constituents as many have shown menacing qualities of greed and self fulfillment. A search begins for an answer outside of their own kind.

All the while, many of the Advent are growing sympathetic to both the populations of the Vasari and TEC. They are becoming disillusioned by the path they chose, but now suspect it was either manipulated or drastically misguided.

Sins of a Solar Empire

Sins of a Solar Empire: Entrenchment

Sins of a Solar Empire: Diplomacy

New Trade Pacts: Factions can establish research, metal or crystal pacts with one another, giving a substantial boost to themselves and an ally