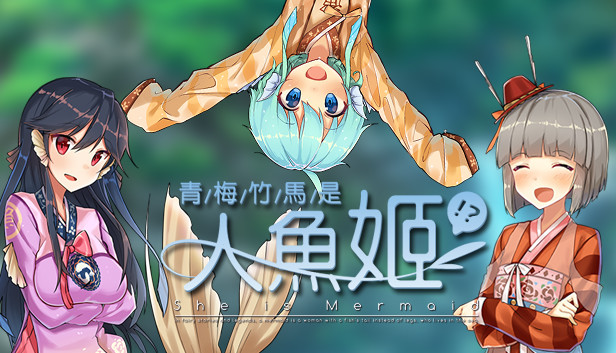 Tired of your normal city life? Maybe it's instinct, maybe it's science, but nature is calling Hiroto back to his rural hometown! Little does he know that his childhood friend has somehow gotten herself turned into a... mermaid!?

"She is Mermaid" is a Visual Novel developed jointly by a Japanese and Korean team and is now available on PC! Besides the relaxing sound effects, the backgrounds have also been upgraded for the PC version.

She has fins...? She has fins! Never underestimate the power of science...
Leaving the big city to return to his rural hometown, our protagonist reunites with his childhood friend Ion.
But she's now... a freshwater mermaid!?
It doesn't end there though, he soon meets another mermaid named Petakko who's memory has become, well, fish-like. Then he runs into Rin, a priestess with a split personality living her life in mystery.
Centered on legends and stories of mermaids, an incredibly unique and science filled summer vacation with Ion, Petakko, and Rin now begins...

CV: Mai Fuchigami
A childhood friend of the protagonist who has somehow gotten herself turned into a mermaid.
Usually a shy and somewhat introverted girl, but, when she's with Hiroto, she sometimes uses her tail to express how she feels...
By hitting him with it!

CV: Aya Suzaki
Another mermaid Ion and the Hiroto meet.
A bright and outgoing girl with a memory system that's basically degraded to that of a fish.
Really, she can barely even remember what happened the day before.
More research is needed to determine if this is normal part of being a mermaid.
It doesn't seem to hold her back any though, she lives her life to its fullest.

CV: risa kasama
A priestess of a mysterious shrine said to have been built by people who moved to the village a long time ago from overseas.
She knows both Ion and Petakko and seems to take care of them.
She's much stronger than she looks. And yes, her punches are incredibly painful.
It is hypothesized that since she is a priestess, she can become possessed by her shrine's deity. It's like she has two completely different personalities!

Changes to the PC version from the original

1. Some background images have been upgraded.
2. The UI has been modified for a better experience on PC.
3. Some branches leading to bad endings have been removed.