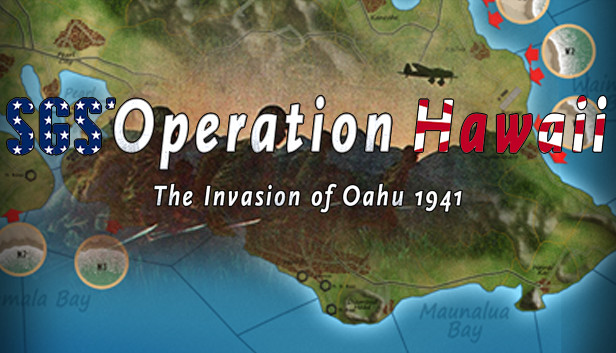 Everyone knows the story of the Japanese surprise attack on the US naval, land and air bases at Pearl Harbor and nearby on the morning of December 7th, 1941. The date marks the entrance of the United States in the Second World War. In the hours that followed the initial attack, there were fears and speculation that it would be followed by an enemy amphibious landing and invasion of Oahu. The eventuality of such an assault had indeed been studied by the Imperial Japanese Navy and rejected as logistically unfeasible. But what-if the case has been different?

This game studies a possible land invasion of Oahu, by a small but well-trained force of Japanese Marines and Army troops, specially trained for the operation and secretly carried to destination in the attack force.

Key decisions as to what the goal of the operation was, where the troops would land, and how long it would last were taken in an ambitious plan. The attack force could not supply or sustain the effort too long, a maximum of 3 or 4 days, so the objective was to wreck as much damage and destruction to the military installations, so that the effects of the air strike would be comforted by the devastation laid on the US ground structures.

Can you, as the commander of the Japanese land force, choose the right place to invade, and then conquer and destroy as much as you can in the allotted time? And, as the surprised American commander of Oahu’s defense, can you block the invader, save the base and possibility turn a disaster into a victory?

The game offers to both side an array of different starting options, each at a cost in victory points. The other side will not be aware of your choice, thereby creating new situations at each start of the game.

All those options and gambles are yours to discover. The game's event and cards allow full replay ability thanks to the numerous various situations that they create.