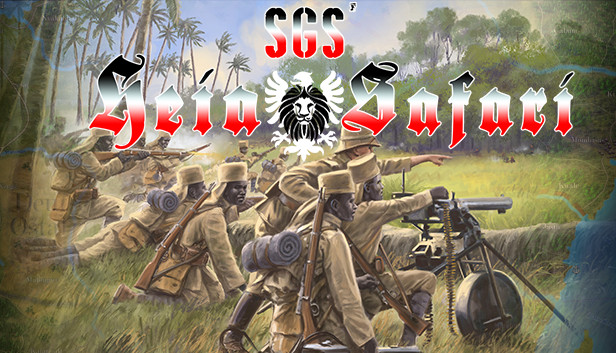 The only campaign where forces of Imperial Germany fought victoriously till the end. Considered as a sideshow, the campaign in East Africa between 1914 and 1918 cost thousand of lives and deprived the Allies from resources that could have been better used elsewhere. You can lead the German commander Von Lettow’s and his skilled Askaris against an array of Allied troops from the Commonwealth, Belgium and Portugal. Get the ‘African Queen’ feeling when playing this exotic campaign.

This game covers the most famous and longest colonial campaign of World War One, between the German Imperial forces in East Africa and their Entente opponents. The vastly outnumbered Germans managed to wage a successful guerrilla war and never suffered a major defeat while keeping British Empire, Belgian and Portuguese forces tied in large numbers to a an unhealthy and meaningless theatre of operations, and this till the end of November 1918.

Can you do as good as von Lettow, the famous German commander? Or, if the Entente Field commander can you win that war quickly and dispatch your forces in significant numbers back to the main fronts of the war?

Ostafrika 1914 lasts 45 turns, each representing on average 1 month of real time, between August 1914 and November 1918. It opposes the Entente Allies and the German Imperial Forces in East Africa. There are a total of 7 scenarios, one for each year between 1914 and 1918 (annual campaigns), one Mid-size campaign starting in 1916, and the full-length Grand Campaign covering the whole war.