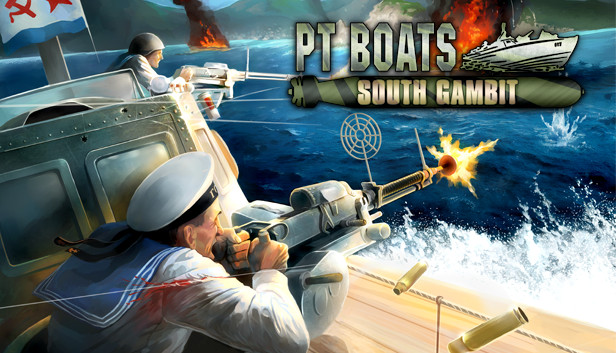 “The seas can be dangerous, but when you’re in command of a crack strike boat crew…”. Deadly naval weapon of WWII is back with more campaigns, ore combat aircrafts, ships and even more fascinating gameplay.
The original game “PT Boats: Knights of the Sea” has opened a new previously unknown aspect of naval battles in WWII. Now with the large-scale add-on “South Gambit” you will find yourself commanding a lethal torpedo boat in the very heart of two new theaters of war. The long listing of authentic warships, boats, weapons and aircrafts is now amplified with the legendary Soviet attack plane IL-2, German torpedo bomber He-111H-6, Italian cruiser Condottieri and many more.
You will join battle in the Mediterranean and transport British troops and supplies to Libya and Tunis, escort convoys to besieged Malta as it was in operations “Harpoon”, “Vigorous” and “Pedestal”. Then you will be relocated to the Black Sea region where some of the most dramatic historic battles were raging. Nazi “Kriegsmarine” will do it’s best to disrupt sea communications between Sevastopol and Novorossiysk. So, you and your PT boat will play their role in night raids to the enemy bases and then in artillery attacks on Nazis in Yalta and Anapa.