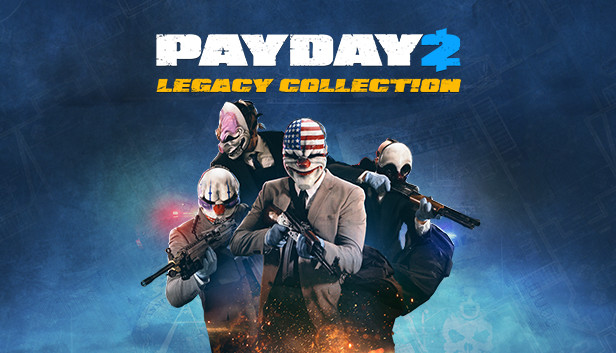 More than five years of DLC content in one massive bundle!

Whether you’re a new player itching to dive into the PAYDAY 2 experience for the first time, or a blooded heister looking for new adventures in crime, the PAYDAY 2: Legacy Collection will provide many hours of intense and exciting action. The content in this pack includes a massive amount of heists, characters, weapons, mods and cosmetic items, for an ever richer PAYDAY 2 experience.

PAYDAY 2: Legacy Collection includes the base game and all paid DLC released up until December 2018, with the exception of the h3h3 Character Pack (a charity item which is sold separately).

If you already own some of the included content (base game or DLCs), you will get a discounted price for PAYDAY 2: Legacy Collection based on how much content you already own.

Get Ready For An Epic Payday!

Items included in this bundle

"PAYDAY 2 ®” and "OVERKILL A STARBREEZE STUDIO®" are registered trademarks of STARBREEZE AB (Publ) and New Starbreeze Publishing AB and/or its affiliated companies in the United States and other countries.
All other trademarks are properties of their respective owners. All rights reserved.