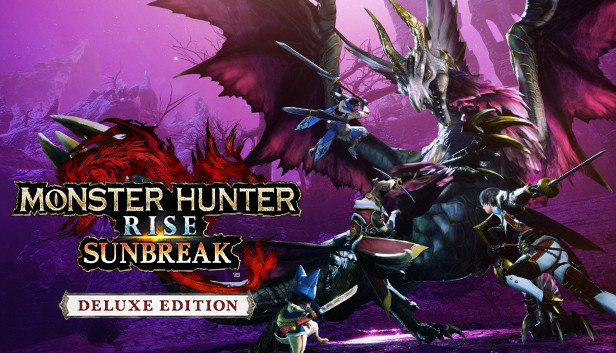 This content requires the base game in order to play: MONSTER HUNTER RISE

Enjoy a bundle of great additional content together with the massive expansion Monster Hunter Rise: Sunbreak in this Deluxe Edition!

Contains the Sunbreak expansion and the following DLC:

Note: Layered armor is a "skin" which changes the appearance of the character without affecting their stats and abilities. The additional content included in the Deluxe Edition is also available separately as the Deluxe Kit standalone upgrade.

The world of Monster Hunter Rise gets bigger and deeper with this massive expansion featuring new monsters, new locales and more!

Note: You must own Monster Hunter Rise in order to play this expansion. Sunbreak content is accessible after completion of the 7-star Hub quest “Serpent Goddess of Thunder”.