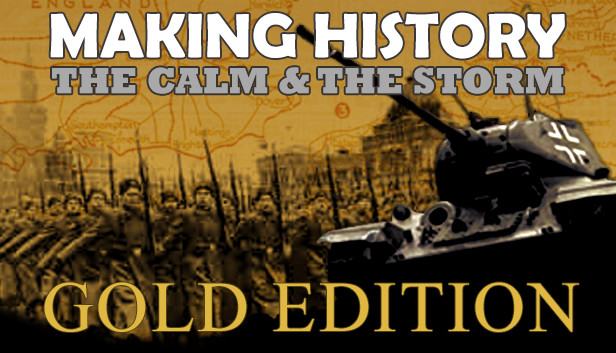 Making History: The Calm & the Storm Gold Edition is a turn-based strategy game in which players apply their strategic skills to forge the fate of their chosen nation during a time of looming crisis.

Game Experience:
The game experience of MAKING HISTORY® will appeal to strategy players who enjoy open-ended games like Axis & Allies® and Civilization®.  The goal of the game is not to replay history as it happened, but to make your own.  Historical starting points for each scenario set the scene; and from there players experience completely open-ended, dynamic gameplay.   Virtually any country is playable across a variety of the bundled scenarios included in the Gold Edition.

Game Mechanics
Over 80 playable nations presents unique challenges based on political character, economic power, military strength, and geography.  Use diplomacy to forge alliances, declare war and negotiate peace.  A dynamic world market allows players to buy and sell vital resources, offer foreign aid, or embargo other nations to further their own strategy.  Research investments produce military and technological advancements that can mean the difference between victory and defeat in battle.  Sophisticated systems offer challenging single player gameplay.  Up to eight players can compete in multiplayer games.