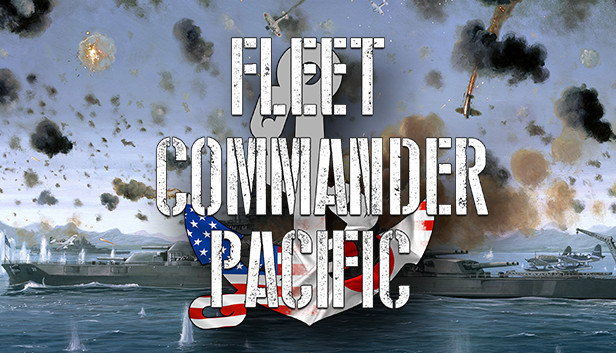 The game is a turn based game, I GO U GO system with alternating phases. You can play hot seat, against the AI or in multiplayer mode. The game contains:

GAME SEQUENCE
The game is played in 10 turns of 4 months each, alternating the opposing sides. The US side, playing last, has a slight strategic advantage.

GAME OBJECTIVE
Each turn, both sides will attempt to control the key sea areas on the map. Each of those brings Victory Points (VP), not always the same for each side in a given sea, representing the different strategic importance of the various seas to the respective sides. At the end of the turn, once scores have been calculated, the leading side gets the balance and accrued it to its overall score. The winner of the game is the side with a positive VP balance at the end of the scenario in play.

GAME PHASES
They are all identical each turn, except when mandated by special case (for instance the surprise attack phase of December 1941 in FC Pacific). In sequence:

BATTLE PHASES
Each battle follows the same process below, for as long as units of both sides remain in the currently selected sea area:

MOVEMENT OF SHIPS
Depending on their missions (patrol or raid) and their speed. On patrol, a ship may move to an adjacent sea and, possibly, one sea further on if speed allows. Most fast ships will automatically succeed, while the slower ones must pass speed tests and, if they fail, stay in the first sea entered. Admirals provide bonus to such tests.

While raiding, ships are allowed one extra sea: they can move up to two sea zones without test and must pass speed checks for the third one.

Crossing through an enemy-controlled sea area to another sea is forbidden.

MOVEMENT OF LAND-BASE PLANES
Those units do not actually move but are ‘placed’ from the plane pool into sea areas adjacent to their sides’ bases or ports. Therefore no such planes can be placed into a sea area where the side holds no bases or ports. Each side places one land-based plane into one sea area, alternating one by one till both run out of planes. Those planes can take and keep control of a sea area. If during a battle planes lose all bases adjacent to the sea where the battle takes place, the said plane immediately return to the plane pool.

CONTROL OF THE SEAS
Only ships on patrol and land-based planes currently at sea are used to determine control. Ships on raids have returned port before such control check. The side keeping or gaining control of a sea area earns as many VP as that sea area provides to that side.

CAPTURE OF BASES AND PORTS
Bases can be captured by direct amphibious assault or via isolation. Ports can only be captured via isolation. Isolation is when a base or port has all its adjacent seas under enemy control for two consecutive turns.

REPAIR OF SHIPS
According to the game’s scale and duration, if allowed, it will depend on the port where the ships end the turn. Each port has a different allocation of repairs and each point of same removes one point of damage on the ships in that port. Unused repairs are lost, they cannot accumulate. Usually, also according to game’s scale, planes and Marines are repaired for free.

REINFORCEMENTS
They will arrive at the start of each turn in specified ports. If such a port is not available or unfriendly, a default port is usually selected in its place. On certain turns, some ships must be picked up and removed, as they are sent to other theaters of operations. Those not removed shall be replaced by possibly equivalent ships if the mandated ships have been sunk already. Land-based planes, and Marines destroyed before may automatically return to play in the pool (depends on scenario scale and duration).

MARINES AND OTHER LAND FORCES
Those units, if present in the game, are used to capture enemy bases, or defend your own. They have their own movement phase and can move up to two sea areas (with or without escort, as players’ desire). When in a battle, they can opt for landing or amphibious assault at the end of any round they have survived. If not in a battle, landing or assault take place in a specific phase after all battles.