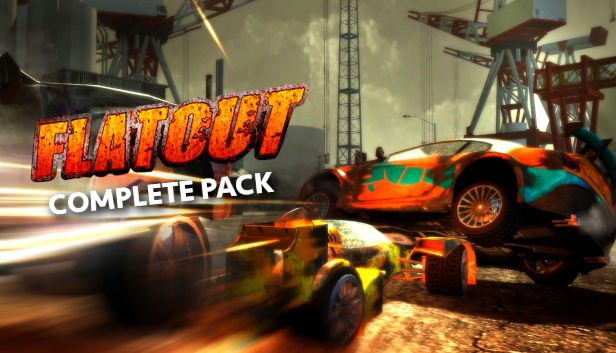 Realistic graphics puts you right into the action. A variety of cars, tracks and characters sets this all new racing game apart from all the others. Smash into obstacles along the way and leave your debris behind. Head into the pit area and fine tune your car to give you the edge over the other racers.

Driving this reckless is no accident! But you might want to cause a few. In these high-speed races, the more damage you inflict, the better. The ultimate in turbo- charged cars and the craziest competitor drivers are waiting to test your best destructive streak. Responsible drivers need not apply. Includes realistic graphics, many cars and tracks, and 12 Rag Doll events mini-games events.

FlatOut 3: Chaos & Destruction is demolition racing at its extreme. Real world physics with 9 different game modes, and over 60 different vehicles available. Players may choose to race, smash and destroy their opponents in a wide variety of online and offline options.

Lay waste to farm houses, fences, and then wreak havoc in a Detroit suburb, race up the walls in giant waste disposal sewers. Let the chaos begin as you race through over 60 different tracks, narrowly avoiding wrecking balls, Double Decker buses and much more.

Create as much destruction in the all new monster tuck mode. Choose from 20 different playable characters, select your weapon from the 47 available vehicles! Create as much Chaos & Destruction! In stuntman mode anarchy rules! Create havoc with some rag doll fun. FlatOut 3: Chaos & Destruction offers more vehicles, game modes and different ways to demolish your opponents before crossing the finish line.

FlatOut's peerless real world physics engine combines vehicles built from 40 plus deformable parts with over 8000 destructible objects per track. Compete in progressively tougher championship wrecking your way through 3 classes to become the ultimate FlatOut champion. Play against 11 other drivers from a choice of 48 cars on 39 tracks in 6 different environments.