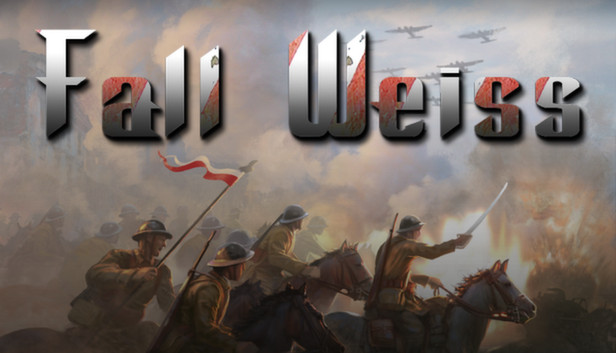 Fall Weiss is a turn based strategy game which takes place during the Invasion of Poland during the World War 2. Player has got possibility to take control over one of the major participants of the conflict which are Germany, Poland and Soviet Union and also to control other countries in the region, which might be interested in taking a part in the conflict, to name Slovakia, Hungary, Romania and Lithuania.

The main goal of the game is to change the history course to the favor of controlled country. Poland will try to defend itself for as long as possible, or until the French offensive in the West will be started. Germany’s goal is to defeat Poland faster than one month and the Soviet Union will try to increase the gains compared to those historical.

Fall Weiss is played with daily turns with the following order sequence: Axis (Germany and Slovakia), Allies (Poland), Soviet Union, Neutral countries. Units are divided to regimental and brigade sizes and each of them has got assigned Action Points (AP), which can be spent to move, attack, reinforce or redeploy. Depends on the country there are various types of armored land units, non-armored land units, airborne unit, fighters, tactical and strategic bombers, there are also naval vessels divided into subtypes, and transport vessels.

Units on the map by default are represented by the figurines with information about the Strength, Action Points and nationality displayed. This allows to easy recognize own units which can still perform some action, and also to find a weak spots in the enemies lines.

Strength of the units depends on the many factors, such as basic strength, experience, war doctrine, commanders, HQs, adjacent units, terrain, weather, fortifications, entrenchments, but what is most important the supply. An unsupplied unit even with best support from all other factors and modifiers is doomed. Basic supply lines are provided by the cities and railroads network, can be also exchanged by the tactical bombers and fleets. Supplies delivered that way can only provide about 75% of the supplies needed by the units to be fully operational, both in battles and movement. The only way to deliver full level supply to the units is to deploy Supply Depots near them. Those are specialized types of units able to deliver 100% supplies even for units being couple of hexes from them.

As the number of Supply Depots is limited for each country and the whole map is almost 20000 hexes, it must be planned ahead where to deploy them, to provide support as efficient as possible.

In Fall Weiss many aspects of the gameplay can be set up to fulfill preferences of the player. Starting with hiding values of enemy units, through adjustable Fog of War radius, customizable battle reports, adjusting how fast the specific actions of the player and AI should be displayed to setting difficulty for each country separately. Also it is very easy to exchange the map and units graphic to make the game completely fit requirements of the player.

On September 1st 1939, German forces attacked Poland along the whole border. Thousands of tanks and planes, more than a million of soldiers marched into Poland. Polish army fought bravely and with tenacity, but on September 17th the Soviets stabbed Poland in the back, the allies withdrew and the country was left alone against two most powerful armies in the world.

When there are no guns, no tanks, no hope, honor is the only thing that's left