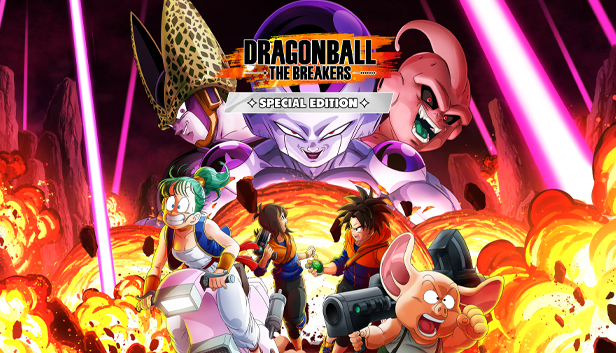 The Special Edition includes the full game, Costume items, Victory Pose, and Vehicle Skin. DRAGON BALL: THE BREAKERS is an online asymmetrical action game in which a band of 7 ordinary citizens tries to survive the Raider.

DRAGON BALL: THE BREAKERS is an online asymmetrical action game in which a team of 7 ordinary citizens tries to survive the Raider (a classic DRAGON BALL rival such as Cell, Frieza, and Buu), who will hunt them down and evolve during the game into an unstoppable force. Escaping won’t be so easy!

*This product is a multiplayer game that is played mainly through online matches between players. The only modes that allow single play are Episodes, which will be the tutorial, and the Practice Mode, which allows players to practice the game.

*Online matches allow you to play against players from all over the world. You will match with people whose network conditions are optimal for the region you play in.