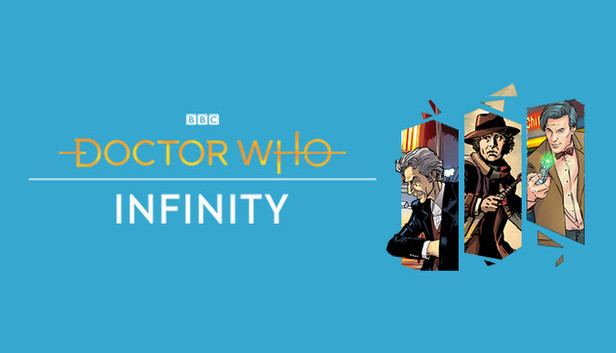 Doctor Who Magazine says "These are the best Doctor Who stories ever told in a video game".

Base purchase of Doctor Who Infinity includes the first two stories.

Doctor Who Infinity is a new platform for experiencing the Doctor's stories, with 6 new tales coming by the end of 2018. Each story features a different Doctor from the 55 year history of the show, including both modern and classic Doctors, companions, monsters as well as entirely new characters to discover!

Each story is brought to life with actors narrating, as part of an amazing audio experience overseen by the award-winning audio director of Monument Valley, Stafford Bawler. Each story is visually brought to life with a combination of comic book style cut scenes interwoven with game play tightly designed to mirror the narrative beats of the story.

Game play changes from level to level with increasing complexity while the recognizable detachable tile mechanic allows us to stay accessible to gamers of all levels of experience. In Infinity, characters like the Daleks, Missy, Jo Grant, and the Doctor literally appear on the board, as do opponents like robots, bombs, firewalls, and time vortexes. You have never played anything like this before. The game design is an innovation on the award-winning puzzle mechanic used in Doctor Who: Legacy -- think of this as the first time you have had the chance to play through original Doctor Who stories from start to finish.

This game is aimed at the adult Doctor Who fan, comfortable with mature, dramatic themes in a series of all new Doctor Who adventures, brought to you by well-known writers, artists and actors in the extended Doctor Who universe.

STORY ONE: THE DALEK INVASION OF TIME

A tragic event on the edge of the Time War has led to the unlikely creation of a dangerous new type of Dalek hybrid, after a gifted young child is forced to survive by hooking herself into a Dalek life-support system.

As the young girl tries to exact her revenge, the Twelfth Doctor, Missy, Bill and Nardole find themselves in the midst of a full-scale assault on Earth’s timeline.

As the invasion spreads, and the Doctor is forced to turn to some of his closest allies for assistance, can they stop this new enemy? And must the Doctor do the unthinkable and ally with the Daleks to save Earth?

STORY TWO: THE ORPHANS OF THE POLYOPTRA

Written by Gary Russell (as his final Doctor Who story), drawn by David Roach, and colored by Dylan Teague. Voice over was recorded with Katy Manning ("Jo Grant") and directed by Gary Russell.

The story, as told in flashback by Jo Jones to her nephew in the style of a classic Doctor Who 4-part story arc, begins at the height of World War 2 as the Third Doctor and Jo Grant find themselves trapped in what appears to be a German bombing in a small mining town.

Here they meet a young orphan girl and her strange companion, who are not at all what they appear to be, and who desperately need their help to travel back to 1842, to a time when the local children still faced the treacherous danger of daily work in the mines.

Doctor Who Infinity - The Silent Streets of Barry Island

You’ve heard of the summer of love? 1967; San Francisco; turn on, tune in, drop out; kids with flowers in their hair? Well, Barry had its own summer of love a year earlier, in 1966. Oh, I’m not talking flower power – it was still mods and rockers round here, suits and scooters or leather and brylcreem. But Barry’s summer of love ended eventually, making way for – well, let’s call it the Autumn of Apathy. No music, no lights, no queues. Just silent streets. At least they were silent – until that night. The night the Doctor arrived…

The Silent Streets of Barry Island, penned by Jacqueline Raynor, is drawn by Emma Vieceli and colored by Kris Carter. It features the Eleventh Doctor, Amy Pond and Rory Williams in mods-n-rockers era Barry Island. It's a summertime love story in an unseasonably snowy Barry Island which is plagued by mysterious, gruesome deaths and disappearances. They've arrived for a planned holiday but quickly have to ditch the beach gear and blend in with the locals. Their guide is Ted, a down on his luck fish n chip shop owner. Ted is voiced by Steffan Rhodri (Gavin & Stacey, Harry Potter and the Deathly Hollows). Look for an exciting new story which features a startling reveal for Doctor Who fans.

Doctor Who Infinity - The Horror of Flat Holm

The Horror of Flat Holm, penned by the multi-talented Mike Collins (who drew The Dalek Invasion of Time), is drawn by Patrick Goddard and colored by John-Paul Bove. It is an epic U.N.I.T. story told in several time periods with the Fourth Doctor joined by Captain Mike Yates (voiced of course by Richard Franklin) and with modern day Osgood (voiced by Ingrid Oliver who is also in The Dalek Invasion of Time) and Kate Stewart. Nick Briggs rounds out the audio cast in an unsurprising role as a new Cyberman character.

The peculiar nature of the sinking of the Glyndwr had the Brigadier request the assistance of a troop led by Sergeant Benton along with Captain Mike Yates and zoologist Charlie Guarneri. As luck would have it, the Fourth Doctor was available to join them in their investigation. Years later, U.N.I.T.'s base on Flat Holm has mysteriously ceased communication and a new U.N.I.T. mission led by Kate Stewart, accompanied by Petronella Osgood, is called to investigate. As it happens, Charlie Guarneri was a family friend -- Uncle Charlie, who she remembered as a young girl -- but she never found out what happened to him.

The decisions of the past will have repercussions in the present for Kate and Osgood, as the investigate the strange goings on at the military base on the island.

Doctor Who Infinity - The Lady of the Lake

This DLC unlocks the third story in Doctor Who Infinity.

The Tenth Doctor and Rose Tyler find themselves pulled into a thematic retelling of a legendary Welsh tale whilst visiting the Black Mountains of Wales.

A dense fog, as well as a full blown alien war have descended on a small village. Luckily the Tenth Doctor and Rose Tyler have just arrived on holiday.

As a piece of alien weaponry poses an existential threat to mankind, the Doctor has to team up with a local poet as they try to unravel the mysteries of why a Lady has been seen walking over the surface of Llyn-y-Van Bach Lake, and why all the animals nearby have been dying at midnight.