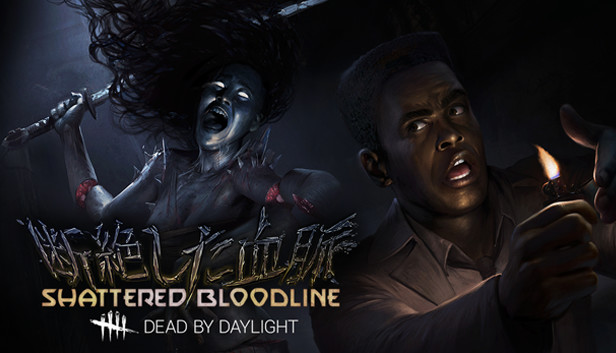 What lies beneath the mundane can be terrifying. Under the layers of quaint family life, violence festers. When this dark rampant force lashes out, lives are broken and families shattered. Wrath was her bloodline. She came home to find unimaginable horrors, which left their mark. Now she walks, haunting and vengeful, between this world and the next. Adam Francis has no legacy, no inheritance. Everything he owns, he had to earn. Disciplined and driven, he knows he can do anything when he puts his mind to it. His hard work paid off when he found a job miles away from home. Now living in Japan, he shares the hard lessons he had to learn on his own.

The Spirit
She inherited incredible fury from her ancestors. The wrath that flows through her veins is her legacy. The terrible pain she suffered set it off. Swift and lethal, The Spirit exacts her revenge endlessly. The Spirit is a phase-walking Killer able to catch Survivors off-guard with her traversal power, Yamaoka’s Haunting. Killer Power - The Spirit: Yamaoka’s Haunting

Yamoka is the name she carries from her ancestors, who unleashed hell on the battlefield. The Spirit draws her power from their wrath, haunting the living as retribution for her suffering. The Spirit can use her power, Yamaoka’s Haunting, to enter an ethereal plane and phase-walk to a new location, unseen by human eyes.

While Yamaoka’s Haunting is active:

The Spirit comes with 3 new perks.

Spirit Fury
Every time a pallet is broken, the fury of The Entity builds within. After breaking 4/3/2 pallets, the next dropped pallet you interact with will be instantly broken by the Entity.

The Inspiring Teacher
Born and raised in Kingston, Jamaica, Adam is a resourceful teacher whose expectations of himself and others are higher than most. He is a driven autodidact who always strives to improve himself. Finding opportunity miles away from his island, he built a new home from scratch. In Japan, he was seen as a hard teacher with a good heart. While he was tough during class, he held study sessions every day after school and spent hours answering any student’s questions. His kind nature allows him to adapt easily and resolve difficult situations. Adam’s personal perks help him to distract The Killer, survive desperate situations, and become more skilled as the trial continues.

Diversion
Activatable Perk. Standing within the Killer Terror Radius while not in a chase for 45 seconds activates the perk. Once the perk is activated, press the Active Ability button while crouched and motionless to throw a pebble, which creates a loud noise notification for The Killer at a distance of 10/15/20 Meters. The perk deactivates once it has been used. “There’s what is easy and then there’s what is right. If you confuse the two, there’s no telling what you become.” Adam Francis

Deliverance
After performing a safe hook rescue on another Survivor, the perk activates. You now have a 100% chance to unhook yourself during the escape attempt. A successful Deliverance from the hook triggers the Broken status effect for 100/80/60 seconds. “I was raised by a strict man who taught me how to make the best of a bad situation.” Adam Francis

Autodidact
You start the trial with a -25% progression penalty for Skill Checks to heal Survivors. For every successful Skill Check completed while healing a Survivor, you receive a Token for a maximum of 3/4/5 Tokens. Each Token grants you a +15% bonus progression for a successful Skill Check while healing Survivors. Great Skill Checks cannot be performed while using Autodidact. Autodidact is not active when using a Med Kit to heal.“There’s no limit to what you can achieve, as long as you back it up with hard work.” Adam Francis

Exclusive Item for Adam
The Shattered Bloodline Chapter includes an exclusive item for Adam, the Graduation Day Suit, only available as part of the DLC. Please note that this item cannot be purchased separately.

The estate was bought by the first of the Yamaoka, a shipwreck survivor, who came from a distant ashy island. He washed ashore just as political tensions sparked the flames of war. Yamaoka joined the battlefield and unleashed hell on his foes. No one could match the raw fury of his katana, which elevated him to a legend. They say his devilish mask haunted the dreams of all men. His fame grew as he spilled blood on both sides of the conflict. With power came wealth, which he used to buy the estate and begin his legacy. The land was passed down from one generation to the next, each one leaving its mark on the landscape. The garden grew and expended through the ages. Now only an old maple tree remains untouched from Yamaoka’s era, representing the whole family.

While the Yamaoka estate displayed a glorious past, the family residence was falling apart. The house needed numerous renovations to remain habitable. The last generation of the Yamaoka family were facing troubled times. Their finances were dire and the situation worsened when the daughter started university, just a few months before the mother became ill. Shouldering both university fees and hospital bills, the father worked past exhaustion. To keep a roof over their heads, he profaned their legacy. The walls of their ancestral home were sealed with moldy materials for a cheap fix. As the house was stripped of its integrity, an old anger was awakened.