Dead by Daylight - Demise of the Faithful 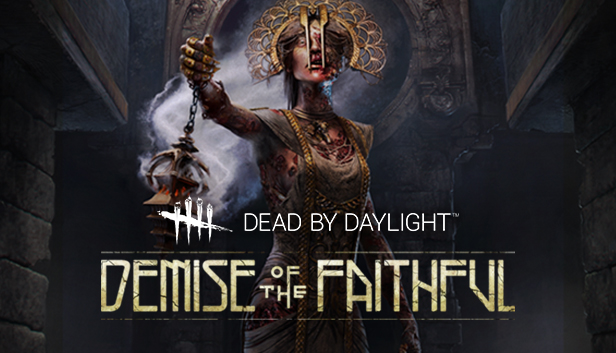 Embrace the immense unknown and surrender yourself to the vast inexplicable: that is the oath of the faithful. When surrounded by darkness, they look inward for a beacon of light to follow, trusting it will lead them to safety. But when their light is distorted by pride and ambition, how long will they err in the dark?

Sold to a Babylonian temple as a child, she sought the means to repel the darkness she carried inside. She found solace in sacred rituals, where she felt safe and empowered. Faithful but proud, she began to rise in status and believed she was untouchable. But when a plague began to defile her body, she confronted her gods, realizing too late that they had no impact on her fate.

Jane Romero was striving to become a powerful icon, a voice that would inspire and support those in need. She fought against powerful executives to send out her message about owning up to your insecurities. Every day she would share her beliefs and practices with thousands of avid followers. One evening, she was driving home after a particularly stressful live show, and feeling drained, she closed her eyes for a moment that had lasting consequences.

The Plague
Devoted to the gods with unwavering faith, this former High Priestess of Babylon convinced hundreds to follow her lead. Hymns and amulets were created in her honor, praising her beauty and foresight. She gained influence during a time of despair, when a dark plague was gaining ground and rapidly spreading across Babylon. Her faith proved to be inconsequential against the disease, which she contracted. While she hid the blisters swelling from her neck, the sores crusting her lips, and the rancid smell of sick clinging to her skin, she continued to lead the prayers, hoping to appease the gods. But no ritual could save her. Growing desperate, she banished herself from Babylon with a small group of followers and traveled North. Her condition then took a turn for the worse, interrupting their journey, and they took refuge in a cold cave, where they met their end.

The Plague’s Power: Vile Purge
The former High Priestess of Babylon wanted to rise high enough to touch the gods. Just as she thought she was untouchable, she contracted a terrible affliction that she kept secret. Every day, she would perform rituals and cleanse her followers, hoping the god of pestilence and mayhem would forgive her. Her condition deteriorated as the plague overtook her body: her toes blackened, her neck mushroomed into cysts, and her throat gagged with blood vomit. The Plague uses her power, Vile Purge, to release a stream of vomit that infects her victims. A gauge controls the amount of time the Power lasts once launched. The Gauge starts empty. To fill it up, the player is required to charge his attack by holding down on the Power button. During the charging, The Plague suffers a speed movement penalty which ends when the power is released or when the charge reaches 100%. At that moment the movement speed is back to 100% of the base speed.

The Plague comes with 3 new perks.

Dark Devotion
The display of your powers creates a whirlwind of panic that spreads throughout the land. You become obsessed with one survivor. Hitting the obsession to the injured state with your basic attack causes the obsession to emit a terror radius. During that time, your terror radius is reduced to 0. This effect can only be triggered once every 3 seconds. The obsession hears the terror radius they emit for the duration. The Killer can only be Obsessed with one survivor at a time. “And terror shall take hold of a defiant non-believer, who shall falsely announce my arrival.” (The Tablet of Adiris, 48.9)

Infectious Fright
The cries of the unfaithful makes your heart leap, as you believe that a divine power causes their agony. Any Survivors who are within The Killer's terror radius while another Survivor is put into the dying state with a basic attack will yell and reveal their location to The Killer.“Horror overcomes the heart of infidels who cry at the feet of the fallen.” (Hymn of Praise, 11. 4)

Corrupt Intervention
Your prayers invoke a dark power that meddles with the Survivors’s chances of survival. The generators located furthest from you are blocked by The Entity at the start of the trial for a limited duration. Survivors cannot repair these generators during that time.“It shall be known across the land that the gods curse the unfaithful.” (The Tablet of Adiris, 3.7.)

The Influential Talk Show Host
Daughter of a famous actress whom she had never met, Jane was raised by her father, a struggling visual artist. Her parents had separated when she was still a baby. Growing up, she sought to emulate her mother’s powerful on-screen presence. She built herself from the ground up, auditioning for commercials, leading radio-interviews, and guest-starring in variety shows. Her authentic delivery and sharp ad-libs, however, cost her dearly. While she encountered failures along the way, she kept believing in her skills, and eventually got the opportunity to co-host a failing talk show.

Live television meant long hours, a low salary, and no stability, but it also offered her a platform to broadcast her own values. She used the show to connect with her audience and deliver genuine material, often discussing her personal issues, gathering a loyal audience that broke records. Her success also generated an increasingly demanding schedule, which she managed all by herself. The growing pressure began to smother her self-confidence and one day she snapped, delivering a catastrophic live interview. That evening, she was driving to her father’s house when she closed her eyes to rest, and opened them moments later, in the realm of The Entity.

Jane’s personal perks, Solidarity, Head On, and Poise allow her to support other Survivors, defend herself, and avoid leaving a trail for the Killer to follow.

Poised
Achieving goals boosts your confidence. After a generator is completed, you leave no scratch marks for a limited duration.“Ok, stay calm. Don’t overthink it and just keep moving forward: you got this.” –Jane Romero

Head On
When your mind is set, there better be no one standing in your way. Allows to perform a rushed action to exit a locker and stun The Killer if standing within range. Head On cannot be used while Exhausted. You do not recover from the Exhausted status effect while running. “People are remembered for the challenges they overcome. You can run away and forget what you’re capable of, or you can face your fears and remind the world who you are.” –Jane Romero

Solidarity
Sharing painful experiences has the power to heal. While injured, healing a Survivor also heals you. “Showing up when things get rough, listening to people’s problems, and supporting those in need; that’s how you become stronger, because that’s how you grow.” –Jane Romero

Exclusive Item for Jane
The Demise of the Faithful Chapter includes an exclusive item for Jane, her Floral Shirt, only available as part of the DLC. Please note that this item cannot be purchased separately.

New Map: The Temple of Purgation

The half-forgotten, temple complex dedicated to the cleansing of the High Priestess’s followers. The vertiginous hypostyle hall was believed to hold the weight of the heavens. Stolen from the memories of The Plague, the temple was planted in the howling Red Forest, whose winds eroded its smooth edges. It now stands as a beacon of fear, visible from all cardinal points.