Dead By Daylight - Chapter XVIII A Binding of Kin 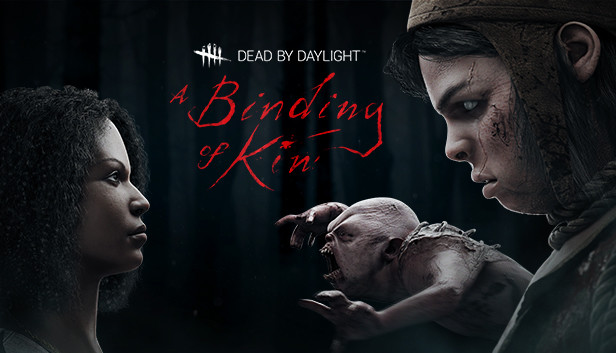 A Binding of Kin is a new Chapter for Dead by Daylight. It includes a unique Killer but 2 characters: The Twins (Charlotte & Victor), and a Survivor, Élodie Rakoto. Purchasing the add-on will unlock its new Killers, new Survivor, and an exclusive item for the Survivor: Élodie’s Sunset Crop.

The new Killer comes as a pair: conjoined twins from 17th century France, Charlotte and Victor Deshayes – The Twins – formed an emotional bond like none other. After a life of hardship and suffering, The Entity has twisted their love for one another into something truly terrifying. The new Survivor is Élodie Rakoto. Cunning, smart, and resolute, Élodie spent her life trying to uncover the mystery of her parents’ disappearance. Grief-stricken and guilt-ridden, Élodie turned to the occult to find the answers she was looking for.

A pair of conjoined twins from 17th century France, Charlotte and Victor Deshayes formed an emotional bond like none other. Born into a life of persecution, they fled to the countryside with their mother, Madeleine, accused by witch hunters of birthing demons. When the trio was finally caught, the children were forced to watch their mother burn before being sold to a mysterious group clad in black cloaks. Prisoners to the cult, they took part in unusual experiments, their animosity towards humanity growing each day. The pair eventually fled, in the process burning the cult’s temple to the ground. Though Charlotte ran to the safety of a nearby forest, her brother—still affixed to her body—died in the escape.

For years to come, Charlotte skulked through the alleys and sewers of France, stealing and finding shelter where she could, avoiding the black cloaks at all cost. She made sure to tend to the corpse of her rotting brother, seeing him as her only remaining family. During a frigid winter, Charlotte, weakened and starving, realized her time was coming to an end. As she gave into the comfort of death, a vicious shriek pierced her ears. Impossibly, Victor spasmed and flailed from her chest, spilling to the ground in a bloody puddle. Before she could react, the boy skittered into a dense, unnatural fog that grew around the two. Stunned, yet horrified at the thought of losing Victor, she charged into the fog, determined to reunite with her only kin.

Though forever bound by blood and trauma, The Twins have been granted the power to separate from their shared body. Together, Charlotte and Victor hunt as brother and sister, doubling the threat to Survivors.

Use Blood Bond to separate The Twins.
Choose to control either Charlotte or Victor and hunt your victims as a deadly duo.
While you’re controlling Charlotte, Victor monitors the Trial, triggering Killer Instinct to reveal the location of Survivors who are near him.
However, Victor can be crushed by Survivors while Charlotte is being controlled.
If crushed, Victor will eventually regenerate onto Charlotte.

SPECIAL ATTACK: POUNCE
While controlling Victor, you can Pounce onto Survivors.
Successfully landing a Pounce deals damage to the Survivor. If the Survivor is at full health, Victor will latch onto them, afflicting the Broken, Oblivious and the new Incapacitated status effects. Victor will also reveal the locations of other nearby Survivors with Killer Instinct.
Survivors can attempt to fight Victor off while’s he latched onto them.
If Victor misses his Pounce, he is momentarily vulnerable and can be crushed by Survivors.

The Twins comes with 3 new perks.

Whenever Survivors interact with a chest or pick up an item within range of your location, you will be alerted to their presence. If there are enough spawn points available, spawn two extra chests.
Hoarder reduces the rarity of items found in chests.

When you damage a generator, other random generators are also damaged. If any of those generators are being repaired, any Survivors repairing them must face a difficult skill check.

Whenever a generator is completed, you gain a token. Consume one Token to increase the distance of your next Lunge Attack.

Cunning, smart, and defiant Élodie Rakoto was born into a lush Parisian household, miles away from her parents' birthplace, Madagascar. She was only fourteen when she lost her parents during a trip to Dyer island. No rational explanation was found to account for her parents' disappearance. Grief-stricken and guilt-ridden, Élodie descended into depression before she turned to the occult for answers.

Fourteen years later, Élodie was still searching for her missing parents. She’d compiled legends, gathered relics, and examined records from ancient civilizations who had sought the incomprehensible Thing that had taken her parents. She’d discovered various names for it: The Abyss, The Infinite, The Hole.

Élodie was about to recover a crucial relic when she was apprehended by the Black Vale, a ring of occult fanatics rumored to perform human sacrifices. As she attempted to escape, she was hit by a faintly familiar scent of vanilla-spiked fruits and lychee nuts. Then a thin, tropical rain drizzled down her face. She'd stepped into a dreamlike place she'd envisioned so many times as a child.

The soft canopy soil under her feet suddenly turned ashen and collapsed. She sank into something dense and cold that swallowed her like quicksand. She screamed, before being smothered by... the abyss...the infinite... the hole...

Start the trial with three tokens. If a chest has already been opened, you can consume a token to search it and retrieve an item. You can search chests much faster.

While sprinting, rather than entering a locker, you will instead pretend to enter it. You leave no scratch marks for the next three seconds.

If you fight hard enough against the Killer’s grasp while being carried, you can drop a pallet to stun them and free yourself.

A Binding of Kin includes an exclusive item: the Sunset Crop for only available as part of the DLC. Please note that this item cannot be purchased separately.