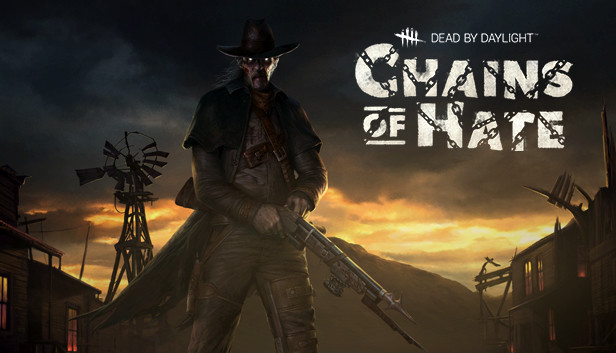 Chains of Hate is a new Chapter for Dead by Daylight. It includes a Killer, The Deathslinger, a Survivor, Zarina Kassir and a Map. Purchasing the add-on will unlock its new Killer, new Survivor, and an exclusive item for the survivor.

The Chains of Hate Chapter includes a new map, the Dead Dawg Saloon, in the ghost town of Glenvale. The Deathslinger, a former bounty hunter with a chip on his shoulder is the new Killer. Following the massacre of those who had betrayed him at Hellshire Penitentiary, The Deathslinger was lured into the Realm of the Entity where he now uses his unique invention—a rifle that fires a chain—to round up survivors for The Entity. The new survivor is Zarina Kassir, a modern day cowboy using her camera and filmmaking skills to help those who cannot help themselves. As she investigated the circumstances around the ‘Mad Mick Massacre’ at Hellshire prison, she unravelled more than she bargained for.

A brilliant and fiery-tempered engineer, Caleb Quinn made a career out of revenge. When his wealthy employer, Henry Bayshore, stole the patents to his inventions, he broke into a violent, bloody rage. For fifteen years, Caleb languished in Hellshire Penitentiary, paying for his crimes. While doing his time, the warden asked him for a favor—fill the private prison with inmates. In return, the warden would use his political connections to imprison Bayshore for life. Caleb agreed. He returned to his workshop and created a pressure-based spear gun that allowed him to capture fugitives alive. With a gang of released inmates in his employ, Caleb hunted the countryside as a brutally efficient bounty hunter. But for all he did, he was just a pawn in a rich man's game. The warden betrayed him, selling Hellshire Penitentiary to Bayshore. In a fury, Caleb stormed Hellshire with his gang, killing anyone who stood in his way. The massacre ended with Bayshore and the warden bloody and dying, left for the inmates to finish off.

The Deathslinger’s Power: The Redeemer

The Deathslinger’s ingenuity affords him the ability to reel in bounties with a unique invention—a heavily modified, hybrid rifle that replaces conventional ammunition with a razor-sharp spear affixed to a chain.

Press and hold the Power button to aim down sights. Press the Attack button to shoot a spear that can lodge itself in a Survivor, allowing them to be reeled in towards The Deathslinger against their will.

The Deathslinger comes with 3 new perks.

After hitting a Survivor 2 times with your basic attack, Gearhead activates for a short duration. Each time a Survivor completes a Good Skill Check while repairing, the generator will be revealed by a yellow aura for as long as it is being repaired.

You become obsessed with one Survivor. After hooking the Obsession, Dead Man’s Switch activates for a short duration. While activated, any Survivor that stops repairing a generator before it is fully repaired causes The Entity to block the generator until Dead Man’s Switch's effect ends. Affected generators are highlighted by a white aura.

Any Survivor who cleanses a Dull Totem will briefly suffer from the Oblivious status effect. If any Hex Totem is cleansed, including this one, the auras of all Survivors are revealed for a short time.

A daring, modern, workaholic filmmaker, Zarina strove to reveal the truth. Growing up in a Lebanese household in Brooklyn, she struggled with two unique cultural identities. With time she learned to embrace the different layers of her identity and roots and borrowed her father’s digital camera to interview members of her community in Bay Ridge. Posting her content online, she slowly built a loyal following.

The sudden death of her father sent a shockwave of anger and pain that left Zarina in pieces. She became obsessed with his murderer—Clark Stevenson—his gang “IR-28,” and his short prison sentence. With the last of her inheritance she bought a new camera and a plane ticket to Nebraska and bribed the warden at Hellshire Penitentiary to let her interview Clark. Filming their first meeting, she asked him about his gang and his violent tendencies. Clark refused to talk; but in the weeks that followed, she used her research to push his buttons and finally got a confession of a pre-meditated crime. Zarina’s film became a tribute to her father and the trail of blood left by gang violence.

Inspired by Hellshire’s “Mad Mick Massacre” story, her next project was based on the Irish outlaw who had heartlessly slaughtered the warden and his guards. Joining the historical walking tour, she infiltrated the prison and reached Mick’s dilapidated cell; but venturing inside, Zarina found more than she’d bargained for.

Once you are unhooked or escape from the hook, this perk activates for a moment. While the perk is active, your aura will not be shown to The Killer and grunts of pain caused by injuries are silenced.

For the People is only active while at full health. Press the Active Ability button when healing another Survivor without a med kit to instantly heal them from dying to injured, or from injured to healthy. You become injured and receive the Broken status effect for a duration. You become the Obsession. Equipping this perk reduces the odds of you becoming the Obsession at the start of the trial.

An early settlement on the unforgiving frontier, the outpost of Glenvale was snuffed out in a ruthless, bloody gang war. Responding to the abduction of five brothers-in-arms, the Hellshire Gang stormed in with six-shooters and dynamite. What began as a standoff with the Mason Kelly Gang quickly broke down into a chaotic war zone. Guns fired indiscriminately in a desperate bid for self-preservation, cutting through gang members and civilians alike.

When the dust settled, the dead outnumbered the living. The hostages were discovered to have been long killed, their bodies disemboweled, guts strewn across town. In a silent rage, the few surviving Hellshire members rounded up their injured enemies and finished them in the same gruesome manner. By nightfall, only the crows remained, feasting glutinously upon their victory.

The Chains Of hate Chapter includes an exclusive item: Zarina’s Leather Jacket, only available as part of the DLC. Please note that this item cannot be purchased separately.