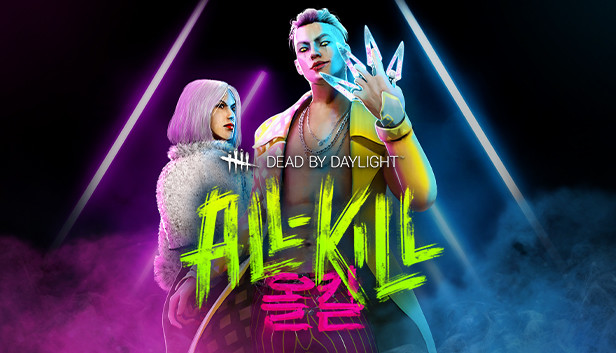 All-Kill is a new Chapter for Dead by Daylight. It includes a Killer, The Trickster, and a Survivor, Yun-Jin Lee. Purchasing the add-on will unlock its new Killer, new Survivor, and an exclusive item for the survivor: Yun-Jin's Polka Dotted Blouse.

The new killer is Ji-Woon Hak, better known to fans across the globe as The Trickster. Famed singer by day, calculating serial killer by night, The Trickster thirsts for notoriety above all, treating both his music and his murders as high art. He was beckoned into The Fog on the eve of his most gruesome performance with the promise of an eager audience and an endless encore. The new Survivor is Yun-Jin Lee, a resilient and ambitious music producer who built her reputation on the success of her one and only client – The Trickster. Ignoring evidence of his true nature in favor of her career, Yun-Jin now stands to pay the ultimate price for her decision.

A vain and talented singer, Ji-Woon thrived under the attention of others. His talent caught the attention of Yun-Jin Lee, a producer with Mightee One Entertainment. She recruited him into the boy band, NO SPIN, kickstarting a lifestyle of fame and celebrity. Yet, over time, the thrill faded. He begrudged his bandmates for dividing the adoration deserved for himself. When a fire broke out in their studio, he left them to die, their pleas for salvation exciting him. Emerging from the inferno, he played the part of bereaved survivor, though he secretly harbored a newfound addiction in controlling the lives—and deaths—of others. He began abducting victims to torture and kill. Murder scenes became elaborate art pieces, and the screams of the dead were recorded and secretly woven into his tracks.

As murder became his artistic outlet, his music faltered. Mightee One’s executives reacted by restricting his creative control. He considered this a grave insult. His revenge came three months later at a private show planned for the executive board. Nitrous oxide seeped into the hall, incapacitating each member. Ji-Woon bound and tortured them on-stage in an elaborate performance. Only Yun-Jin was given a stay of execution—his favorite allowed to be the sole audience member, eyes pried open. As the show ended, he bowed, and made his way to Yun-Jin, intent on tying up loose ends. But before he could strike—The Fog. Billowing in, it revealed a realm adorned with rusted hooks, sustained by a million eyes that would watch him, run from him, experience him. All he had to do was accept, become an implement of The Fog and, most importantly, make them scream.

A mesmerizing skill honed through a lifetime of practice, The Trickster unleashes a flurry of throwing knives with rapid-fire speed.

Start each trial with 60 Blades. Press and hold the Power button to wind up and enter the throw state. While in the throw state, tap the Attack Button to throw a single Blade, or hold down the Attack button to unleash a flurry of Blades. Throwing a flurry increases control and throw rate while decreasing movement and speed. Blades can be restocked at lockers.

The Trickster comes with 3 new perks.

When carrying a Survivor, all other Survivors within your Terror Radius suffer from the Exposed status effect for a brief duration.

After a Survivor performs a rushed vault through a window, the Entity blocks that window for a short period of time. The Hex effects persist as long as the related Hex Totem is standing.

Whenever you hook a new Survivor, you gain a token. Once the final generator has been repaired, the Entity blocks both Exit Gate switches for a time based on the number of tokens in your possession.

Resilient and ambitious, Yun-Jin Lee was born into a life of hardship finding success in the music industry after years of effort and self-sacrifice. At seventeen, she auditioned for renowned record label Mightee One Entertainment. While she was rejected as an idol trainee, she obtained an unpaid internship at the studio. For the following years, she created some of the studio's biggest hits, without any credit or recognition. To get her dues, she emerged in the public eye wearing flamboyant fashion and put soundbites into her songs that looped her artist name, Magnum Opus. Fans began to recognize her songs and she became the producer of NO SPIN, a poorly performing boy band that needed her special touch.

To make NO SPIN stand out, she added a fresh recruit to their rank: Ji-Woon Hak. Within hours their first video was a viral sensation. But their success took a tragic turn when a fire engulfed the recording studio. All members of NO SPIN perished except one: Ji-Woon. To save both of their careers, Yun-Jin created a new single that re-launched Ji-Woon as the Trickster. The new single broke records internationally, launching Trickster's global tour. While success greeted them on every shore, so did a series of disturbing murders.

Then pressure came from Mightee One Entertainment who disapproved the violent themes in the Trickster's music. Yun-Jin and Ji-Woon were given three months to create a commercial hit. When the time came, Yun-Jin took a seat next to the executives, confident that the Trickster's performance would impress them. What followed was a terrifying nightmare coming to life.

Each time another Survivor is hooked, you gain tokens that when consumed grant a progression bonus after successfully performing a great Skill Check on generators.

After stunning the Killer with a pallet, break into a sprint to escape the area. Sprinting causes the Exhausted status effect, and the perk cannot be used again while Exhausted.

Whenever a nearby Survivor gets hit by a basic or special attack Self-Preservation activates, hiding Pools of Blood, Grunts of Pain and Scratch Marks you leave behind for a short time.

The All-Kill chapter includes an exclusive item: The Polka Dotted Blouse for Yun-Jin, only available as part of the DLC. Please note that this item cannot be purchased separately.