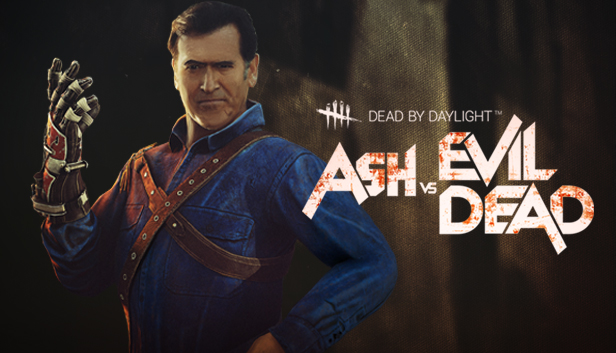 Ash vs Evil Dead is a brand-new character for Dead by Daylight. Purchasing the Ash vs Evil Dead DLC will unlock a new survivor, Ash Williams and an exclusive item for him.

Ashley J. Williams, the legendary hero from the Ash vs Evil Dead horror series, has entered the realm of the Entity. While this time the chainsaw is not his to wield, Ash knows how to escape gruesome death. Wander through The Fog as Ash and escape evil once more.

During a weekend at a cabin, Ash uncovered the Necronomicon Ex-Mortis (Book of the Dead) and awoke something dark in the woods. Evil possessed his friends, whom he was forced to kill, and his right hand, which he sawed off. For the next thirty years, Ash ran from his past, working at a Value Stop department store and seducing women in dive bars. But he screwed up one night when he read from the Necronomicon to impress a woman. Evil found him once more. After a terrible fight, Ash, drawing his last breath, was taken by the Knights of Sumeria and transported into the future. But after his deal with a demon went South, Ash found himself in the realm of the Entity, without shotgun or chainsaw.

Flip-flop
You have an uncanny ability to escape the inevitable. While in dying state, of your recovery progression is converted into wiggle progression when you are picked up by The Killer, up to a maximum of total wiggle progression. "Catch ya on the flip-flop." -Ash Williams

Buckle up
Unlocks potential in one's aura reading ability. The recovery progress of dying Survivors can be determined by the intensity of their auras at a distance of up to meters. When you heal a Survivor from the dying state to injured, both the healed Survivor and yourself see The Killer's aura for a duration. “Ghost beaters never leave a man behind." -Ash Williams

Mettle of Man
Evil has a way of always finding you. After getting hit by a Killer's basic attack, the perk activates. Once activated, the next occasion that would put you into the dying state from the injured state is ignored. The next time you heal back to full health, your aura will be revealed to the killer when you are further than from the killer. The perk will deactivate the next time you are put into the dying state. Increases your chances to be the Killer’s obsession. Only one obsession per match. "Evil has a bullseye on my back the size of Tiger Stadium." -Ash Williams