Dead by Daylight - A Nightmare on Elm Street™ 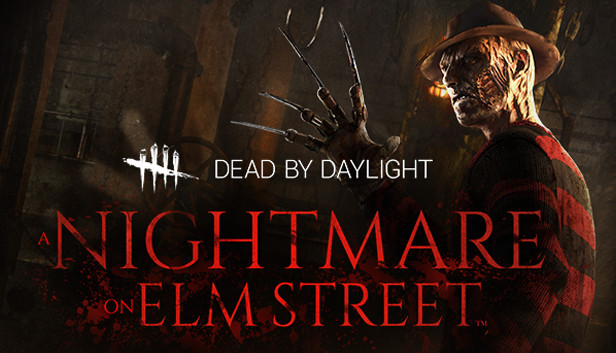 A Nightmare on Elm Street™ is a brand new Chapter for Dead by Daylight.

There are boogey men, and they do live under your bed. They are inside your room, and inside your mind - your dreams and sometimes dreams come true. Freddy Krueger knows the true meaning of haunting. The true meaning of pushing someone into that dream state where you are uncertain whether you are awake or asleep - alive or on the verge of death. Some more than others will resist sleep, like young Quentin, who is forced to head back where Freddy learned about revenge. Back to Badham Preschool.

Back to school
Who would have thought that dreams could actually do harm? Physical, pain inducing harm? Fear and pain stemming from a scarred soul who seeks revenge for a punishment he deserved. Freddy Krueger will always be remembered - whether you are awake or asleep.

A Nightmare on Elm Street™ is a Chapter for Dead by Daylight. It includes a new Killer, a Survivor and a Map.

Freddy Krueger
How will you stop someone who won’t even let your dreams be? Who will never let you rest and regain some strength so you are able to keep on fighting. Freddy is relentless in his struggle and yearns for retribution. He does not sees the wrongs he did, but rather how he was wronged. He does not hear the cries of pain and suffering children. He just sees his claws closing in on your neck.

Death won't accept him and thus he remains, a calamity, indisputable master of his victims' nightmares. Dream Demon allows The Nightmare to pull Survivors into the Dream World.

Once in the Dream World:


Fire Up
The increased pressure of losing your prey fills you with anger and gives you unsuspected motivation. Each time the Survivors complete repairs on a generator, Fire Up grows in power and grants speed bonus to pick ups, drops, pallet breaks, generator breaks and vaults.

Remember Me
You become obsessed with one survivor. Each time you Hit your Obsession, you increase the opening time of the Exit Gates up to a maximum. The Obsession is not affected by Remember Me. Only one obsession per match.

Blood Warden
Once per match, once the Gates are opened, hooking a Survivor summons The Entity to block the exits for all Survivors for a limited time. While Blood Warden is active, auras of survivors located within the Exit areas are revealed to you.

The Sleepwalker
Quentin Smith will never run out of pills to keep him awake, of energy drinks to make him go another mile or another hour. He will never stop, and hopefully he will never sleep. Ever again. Or at least until he’s managed to stop Freddy. Fear poses an option: head into the storm and ride it out, or accept the inevitability of death and just go to bed. Quentin chooses the first one. But how long can he avoid sleep? And how will he manage in this place? Where even death can’t provide any kind of tranquility.


Pharmacy
You have a knack for finding medicine. Searches through chests are faster and the noises they cause along with their hearing distances are reduced. Pharmacy guarantees an Emergency Med-Kit on your first completed chest search.

Vigil
You watch over your friends even in dire situations. You and your allies within range recover from Exhausted, Hemorrhage, Mangled, Hindered and Blindness status effects faster.

A place for teaching
When you think “preschool”, you think of learning. Development and knowledge. You put trust in its meaning and heritage. Badham Preschool however, was something completely different. On the outside it posed as a place where everyone could feel safe. But it held pain and suffering inside. Freddy roamed the premises and distorted everything we took for granted. Nowadays, the preschool is just a shattered memory. Where hallways are abandoned, and where toys provide a disturbing sight of never forgotten torment. It’s not what it once was, and it will never return to its old shape. It is forever tainted.