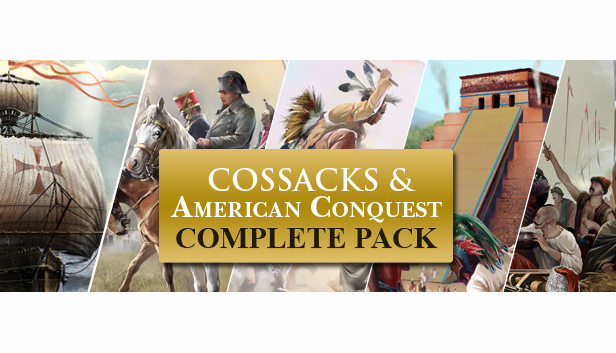 American Conquest – Players set sail from Europe to discover new world and conquer its innumerable riches. The game begins in 1492, when Columbus lands in the Caribbean beginning three centuries of war as 12 different tribes and nations battle for survival and conquest. In eight historical campaigns spanning 42 missions you will play the role of great legends such as Pizarro and Washington commanding epic real-time battles containing up to 16000 soldiers on 3D landscapes. Harness new technologies, unique weaponry, improved fighting units, and the delicate world of diplomacy. Play with fire! Conquer America!

Three centuries of war continue - with even more frantic combat and more desperate power struggles raging across the American continent. The Spanish sound the attack on Yucatan amidst fierce Maya and Aztec resistance. The Germans put all their efforts into finding the legendary Eldorado. The Pontiac Uprising ends in a terrifying bloodbath between Native Americans and the British. And the Russians will do anything to conquer Alaska at the cost of the Haida.

Let the battle begin! The Cossacks II: Battle for Europe add-on continues the renowned Cossacks II:Napoleonic Wars game. It depicts the rather short historic period of the Napoleonic wars. The Napoleon wars changed Europe forever, leading to the formation of empires and putting an end to almost one thousand years of constant strife between small states. The game provides mass-scale battles between thousands-strong armies of the nations involved in conflicts during this period. The theatres of operation introduce France, Britain, Austria, Russia, Prussia, Egypt, and three nations not represented in the original game – Spain, the Grand Duchy of Warsaw (Poland), and the Confederation of the Rhine.

In Cossacks II: Napoleonic Wars , lead your 19th century army to glory in this much-anticipated sequel to the internationally acclaimed Cossacks: European Wars. Whether fighting as Napoleon's highly disciplined "Grand Arme", the tenacious Russians and their Cossack horseback warriors, the Austrians, Britons, Prussians, or Egyptians, the challenges will be daunting as you master weapons and tactics during a time that redefined modern warfare.

Cossacks: The Art of War – continues the history of the great battles of XVII–XVIII centuries, and introduces five new campaigns, two nations, some new units and much more.

Cossacks: Back to War

To stand alone in war is extremely unpleasant. Extremely pleasant, on the other hand, is the stand-alone version Cossacks: Back to War. Containing all of the gameplay features of Cossacks: European Wars and Cossacks: The Art of War, this is a complete care package for all current and future Cossacks fans. This add-on contains 100 captivating missions taking place between the 16th and 18th centuries. In addition, two new nations, Switzerland and Hungary, are included. These countries waged war in the late Middle Ages and essentially influenced the development of European military strategies. This addition causes the second add-on of Cossacks to pass the threshold of allowed gaming fun.

This expansion contains four single-player campaigns from the original game "Cossacks: European Wars", and five – from "The Art of War": nine campaigns with 63 hardcore missions. Play additional 30+ hours of Cossacks!

Cossacks: European Wars is a historical real-time strategy based on events of the 16th through the 18th centuries in Europe, when nations and states were created and demolished, and wars shed seas of blood. There are 16 nations or regions in Cossacks: Algeria, Austria, England, France, the Netherlands, Piemonte, Poland, Portugal, Prussia, Russia, Saxony, Spain, Sweden, Turkey, Ukraine, and Venice. Each has its own original graphics, economic and technical development peculiarities, military advantages and drawbacks, and unique units and technologies, providing vast choices of tactics and strategy in war against any enemy. Thus, England is the mightiest sea power, Austria has powerful light and heavy cavalry, and Cossacks are the pride of the Ukrainian army.