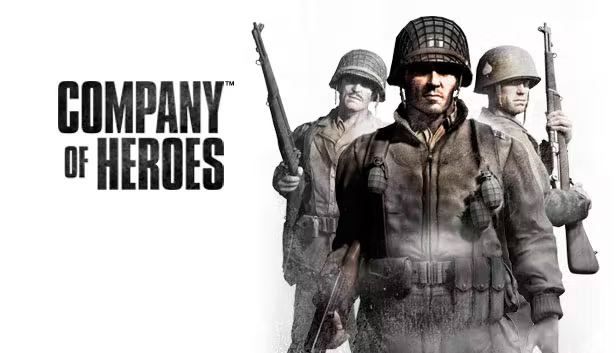 A real-time strategy (RTS) game set in World War II, Company of Heroes brings to life -- in full cinematic detail -- the greatest war mankind has ever known. Gamers will experience the journey of the brave men of Able Company in a deep single-player campaign that begins with the invasion of Normandy through their fight across Europe. Company of Heroes' completely destructible environment means no two battles ever play out in the same way. Advanced squad AI brings soldiers to life as they interact with the environment and execute advanced squad tactics to eliminate the opposition forces. Company of Heroes follows the travels of Able Company as they go from the horrific landing at Normandy Beach through the push through the French countryside, culminating with the collapse of the German 7th Army. The single-player campaign consists of 15 long and enjoyable missions ranging from capturing the town of Cherbourg to a covert operation to take out a V2 launch site to a truly horrific battle through the hedgerows to capture Hill 192. Each mission is preceded by a well done in-engine cutscene and briefing.
© SEGA. Developed by Relic Entertainment Inc. SEGA, the SEGA logo, Relic Entertainment and Company of Heroes are either registered trademarks or trademarks of SEGA Corporation. All rights reserved. All other trademarks, logos and copyrights are property of their respective owners.
windows Minimum
OS: Windows® XP or Vista
Processor: 2.0 Ghz Intel Pentium IV or equivalent or AMD Athlon XP or equivalent
Memory: 512 MB RAM
Graphics: DirectX 9.0c compatible 64MB video card with Pixel Shader 1.1 support or equivalent and latest manufacturer drivers
Storage: 9 GB of uncompressed free hard drive space (We recommend having 1 gigabyte of free space after installation)
Sound card: DirectX® 9.0c compatible 16-bit sound card
windows Recommended
OS: Windows® XP or Vista
Processor: 3.0 Ghz Intel Pentium IV or equivalent
Memory: 1 GB RAM
Graphics: 256 MB NVIDIA GeForce 6800 series or better