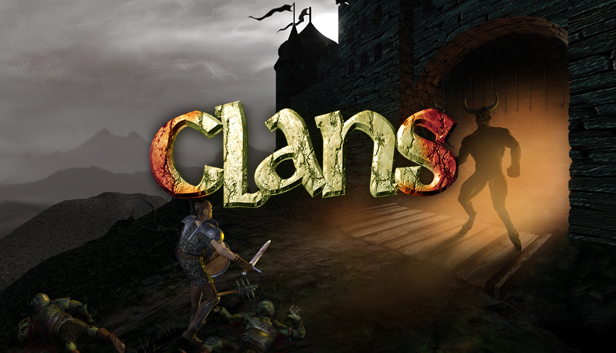 Your goal is to confront and destroy the Demon and locate the lost
Crown of Peace. You will roam your once-beautiful land, routing out
the Demon's hateful minions, solving the mysteries of the fortress,
and moving ever closer to your final encounter with the Demon. Summon
your courage and raise your sword for a fight to the death.

7 Levels: At the Gates; Underdark, a cavern realm of molten lava;
Chambers of Torment, the dungeons of the fortress; The Commoners Quarters;
Garden of Eternity, the fortress courtyard; The King's Quarters; The Dragon's Den

Fight for your clan and your world as one of four unique characters each possessing
distinct skills and abilities.

When you launch Clans, you will see a window pop up:

"Please insert the CLANS CD! Hit OK when done, or Cancel if you don't want any music."

This is an olde school Diablo type game, back in the days when games were run with the CD inserted. The interesting feature of this particular game is that the
contents of the original CD contained only the music for the game. What this means is that you can put ANY music CD into your CD player and the game will play it! If you don’t want to have music playing, simply hit ‘Cancel’ and the game will launch. Have fun!