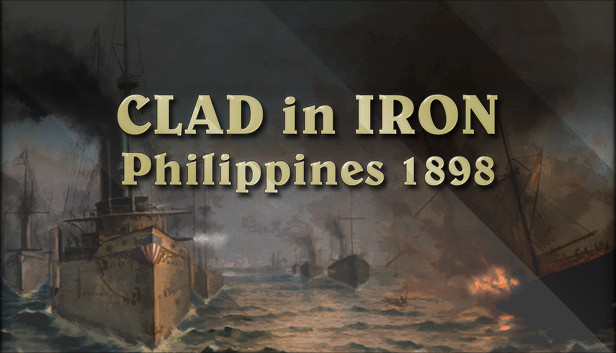 CLAD in IRON: Philippines 1898 is a Spanish-American War alternate history naval game in which a turned-based wargame and a real-time strategy are combined.

Alternate history is a genre of fiction consisting of stories in which historical events occur differently. These stories contain "what if" scenarios at crucial points in history and present outcomes other than those in the historical record.

The first battle between American and Spanish forces was at Manila Bay where U.S. Navy's Asiatic Squadron defeated a Spanish squadron. The following Dewey's victory, Manila Bay was filled with the eight warships of Germany. The Germans expected the confrontation to end in an American defeat, with the Filipinos revolutionaries capturing Manila and leaving the Philippines ripe for German picking. The main forces of the U.S. Asiatic Squadron, including the mighty cruiser USS Olympia, are forced to guard the Manila Bay from German warships.

The shocking outcome of the Battle of Manila Bay spurred the Spanish government to organize a relief expedition. Warships, troopships and transports arrived from Spain to Iloilo City. Coming new battle between the rising and falling empire!

Manage your fleet and army, hunt the enemy's fleet, hide your weak squadrons in protected ports until reinforcements arrive, blockade enemy trade routes, amphibious assaults and harbour sieges, struggle for dominance over the seas in turned-based strategic mode - all of these actions are possible in CLAD in IRON: Philippines 1898.

The real time tactical battle mode allows you to set up battles and squadron groups with their formations and management using realistic ship models and characteristics as well as advanced ballistics and weapon models. Choose your ships, increase the experience of your crews and send your squadron into the high seas. Command a battle formation and experience the power of iron and steam in a turned-based maritime strategy mode while fighting battles with a tactical real time naval simulation game.

Raise anchor and get CLAD in IRON: Philippines 1898 NOW!