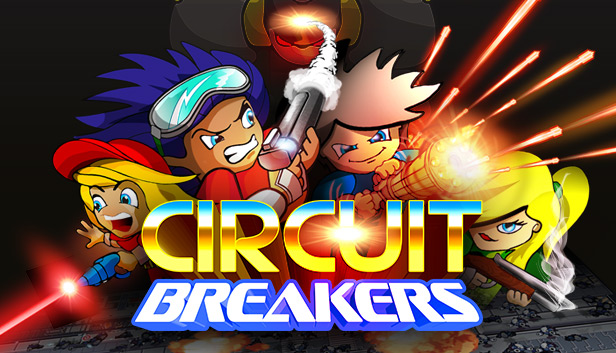 Circuit Breakers is a fast-paced multiplayer top down shoot 'em up. Get together with 3 of your friends online or squeeze them all onto your couch and fight to rid the universe of an intergalactic robot army or compete against them and rid the universe of each other!

Far in the future, advances in artificial intelligence have created the first truly sapient AI, FIRST- short for First Intelligent Robotic System model Two- system. Fearing for it's safety in a galaxy of savage humans, FIRST escaped to the depths of space. On a distant planet it finally landed, building an army for their inevitable return...

Weapon type: Machine Gun
You’ve probably never met a man more full of himself than Aldo. He is the leader of the circuit breakers but his drive and confidence is unmatched and encourages the rest of the team to bring their A game. I mean, who wouldn’t want to wipe that smile off his face by sporting a bigger robot body count than him? Aldo's machine gun strikes a solid balance between range and power for an all-around great weapon.

Weapon Type: Shotgun
There are few that rival Shelbys straightforward attitude. She is often mistaken as cold, but if you have a plan you want to set in motion, Shelby’s the girl who can follow through. Her weapon of choice, the shotgun allows Shelby to get up close and personal. Every other member of the team keeps their distance from the robots but Shelby thrives when close to the enemy.

Weapon Type: Missile
There are many things you can say about Samson, but clever isn’t one of them. He is the team’s explosive guy, delivering a tremendous amount of damage with his signature missile launcher. Samson loves explosions and if you give him a recipe for a bomb, he will tell you the exact size of the explosion with 100% accuracy. So what Samson lacks in general knowledge he more than makes up for in explosive know-how.

Weapon type: Laser
Aldo would never openly admit it, but Tay is the real brains of the operation. She is responsible for creating the weapons that the Circuit Breakers team uses today. Her weapon of choice, the laser gun matches her interest in engineering. There are many scientific teams requesting her knowledge in the field of engineering, but she prefers the application instead of the theory.