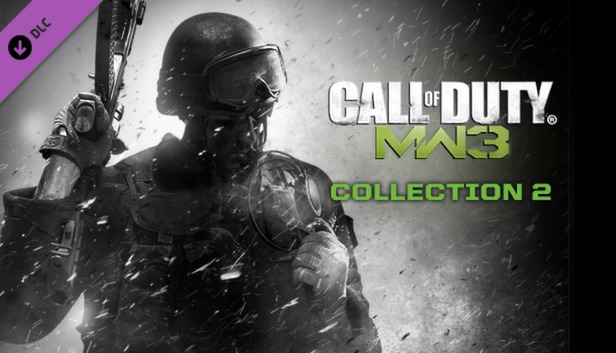 This content requires the base game in order to play: Call of Duty: Modern Warfare 3

COLLECTION 2: TEAM UP. FACE OFF.

The second Call of Duty®: Modern Warfare® 3 DLC Collection launches with all-new Multiplayer/Survival Mode Maps, Special Ops Missions and the debut of Face Off maps. Totally new to the franchise, Face Off distills all the fun and intensity of multiplayer into a new breed of 1 vs. 1 and 2 vs. 2 close combat. In addition to this all-new game-play experience, Collection 2 deploys with 3 multiplayer maps and 2 Special Ops Missions, offering fans new venues to test their Multiplayer and Special Ops skills.

FACE OFF: WHO’S GOT YOUR BACK?
Experience an all-new way to play multiplayer with your friends. Totally new to the franchise, Face Off distills all the fun and intensity of multiplayer into a new breed of 1 vs. 1 and 2 vs. 2 close combat. Featuring smaller, super-concentrated multiplayer maps that are specially designed to encourage strategy, skill, and teamwork like never before.


© 2011-2014 Activision Publishing, Inc. Activision, Call of Duty and Modern Warfare are registered trademarks and Call of Duty MW3 is a trademark of Activision Publishing, Inc. All rights reserved. The ratings icon is a registered trademark of the Entertainment Software Association. All other trademarks and trade names are the properties of their respective owners. Published and distributed by Aspyr Media, Inc. “Aspyr” and the Aspyr “star” logo are federally registered trademarks of Aspyr Media, Inc. Mac and the Mac logo are trademarks of Apple Computer, Inc., registered in the U.S. and other countries. The ratings icon is a trademark of the Entertainment Software Association. All other marks and trademarks are the property of their respective owners. Non-transferable access to special features such as exclusive, unlockable, downloadable or online content, services, or functions may require single-use serial code, additional fee and/or online account registration (17+). Access to special features may require internet connection, may not be available to all users, and may, upon 30 days notice, be terminated, modified or offered under different terms. Online play and download requires broadband internet service. User responsible for associated fees. All rights reserved.