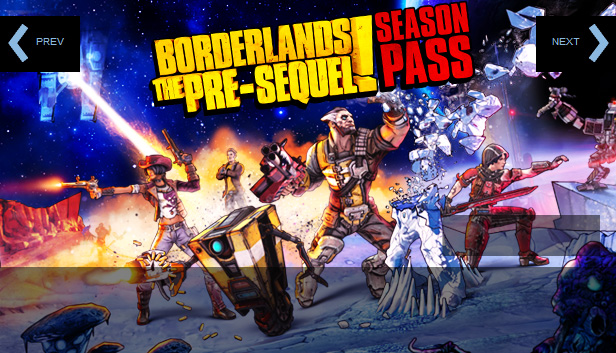 This content requires the base game in order to play: Borderlands: The Pre-Sequel

Play as everyone’s favorite maniacal tyrant-in-training…or at least his body double. With the Handsome Jack Doppelganger Pack, use the power of your good looks and charm to distract your enemies into submission. Or, just cut them down to size with your witty banter. Or just shoot them. That works too.

With all new narrative content, this add-on begins as Vault Hunters Axton and Gaige catch up on the story thus far via The Holodome Onslaught, a new challenge arena that lets players fight through wave after wave of exciting enemies and bosses. While the veteran Vault Hunters join the rest of the crew at Crimson Raiders HQ and learn of recent events, players will face off against some of the game’s most memorable badasses to earn awesome, new weapons and gear along with radical new heads and skins!

As bonus content, this download also includes the Ultimate Vault Hunter Upgrade Pack, which raises the level cap and gives your characters 10 new levels plus 10 new skill points to earn!

Introducing Sir Hammerlock’s sister, Lady Aurelia the Baroness! Nobody’s as cold as she is, literally, as her “Cold-As-Ice” action skill inflicts tons of cryo damage on the baddies of Elpis. She can also turn any co-op partner into a servant using her Contractual Aristocracy skill tree. Nothing stands a chance against this frozen-hearted aristocrat!

In this campaign add-on, Jack digitizes the vault hunters and sends them inside Claptrap’s mind to find a mysterious code and get out of Claptrap’s consciousness without going nuts. Our anti-heroes will have to deal with Claptrap’s malware and digital representations of his crushing loneliness! This pack also includes a bonus 10 level cap increase.