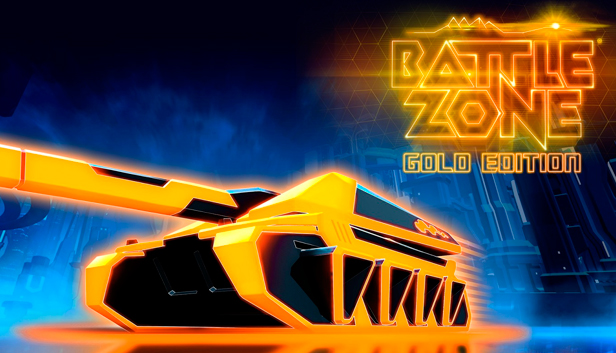 Strap into the cockpit of the Cobra – the most powerful tank ever built – and experience first-person tank combat across neon-scarred sci-fi landscapes in an explosive campaign for 1-4 players.

Load your tank with a wide range of devastating weapons and power-ups, and blast your way to a colossal final showdown.

Now you can conquer the battlefield on PC with or without a VR device in the Battlezone Gold Edition, which includes the base game, plus all additional content released to date:

FULLY PLAYABLE IN VR (SteamVR or Oculus) – For the ultimate Battlezone experience, strap in using your VR headset to gain true battlefield awareness, a monumental sense of scale and breathless combat intensity.

LIMITLESS SOLO & CO-OP PLAY – Experience a thrilling campaign for 1-4 players where different environments, enemies and missions blend together across a procedurally generated campaign. No two playthroughs will be the same!

FIGHT WITH STYLE – Customise your tank’s look, with various skins, bobbleheads, and horns, all included in the Gold Edition!

CLASSIC MODE – Experience where it all started with Classic Mode – featuring original two-track controls and worldwide leaderboards to test yourself against!