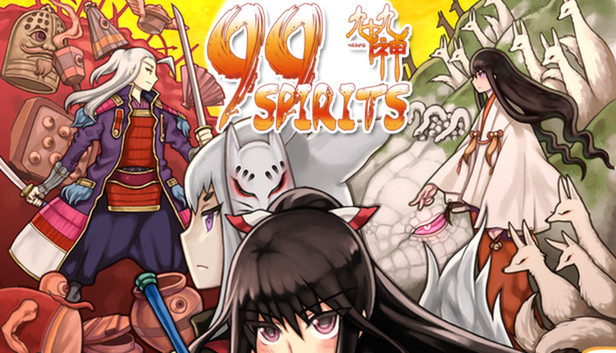 Hanabusa is a young headstrong girl living in the Heian capital within medieval Japan. But when her mother is slain by evil spirits, her life turns into one of vengeance as she sets out to hunt and destroy the spirits.

During Hanabusa’s travels, she meets a white fox who turns out to be a servant of the mountain god. Hanabusa receives a special sword passed down from her mother, which gives her the ability to see the true forms of spirits to help slay them. Shortly after, a spirit claiming to be Hanabusa’s long-lost father, Hidetada, breaks her sword and leaves Hanabusa powerless and confused.

Now to mend her broken sword and learn the truth about her father, Hanabusa embarks on a journey to annihilate every last one of the evil spirits.

Press:
Without a shadow of doubt, 99 Spirits is one of the most imaginative and accomplished indie games on the market. (True PC Gaming)

Mixing the puzzle and RPG genre along with some anime themed influences, 99 Spirits became an absorbing and addicting title that was nearly impossible for me to put down for too long. (Moonlitasteria)

Just as I am always after a unique storyline in a game, I am always searching for something unique in terms of gameplay and 99 Spirits has given that box a BIG tick. (The Otaku's Study)

(Latest build is 1.05. If your build is shown as an earlier one at the bottom right corner of the main menu screen, 'Download patch' from fruitbatfactory.com/99spirits or your Gamersgate library.)