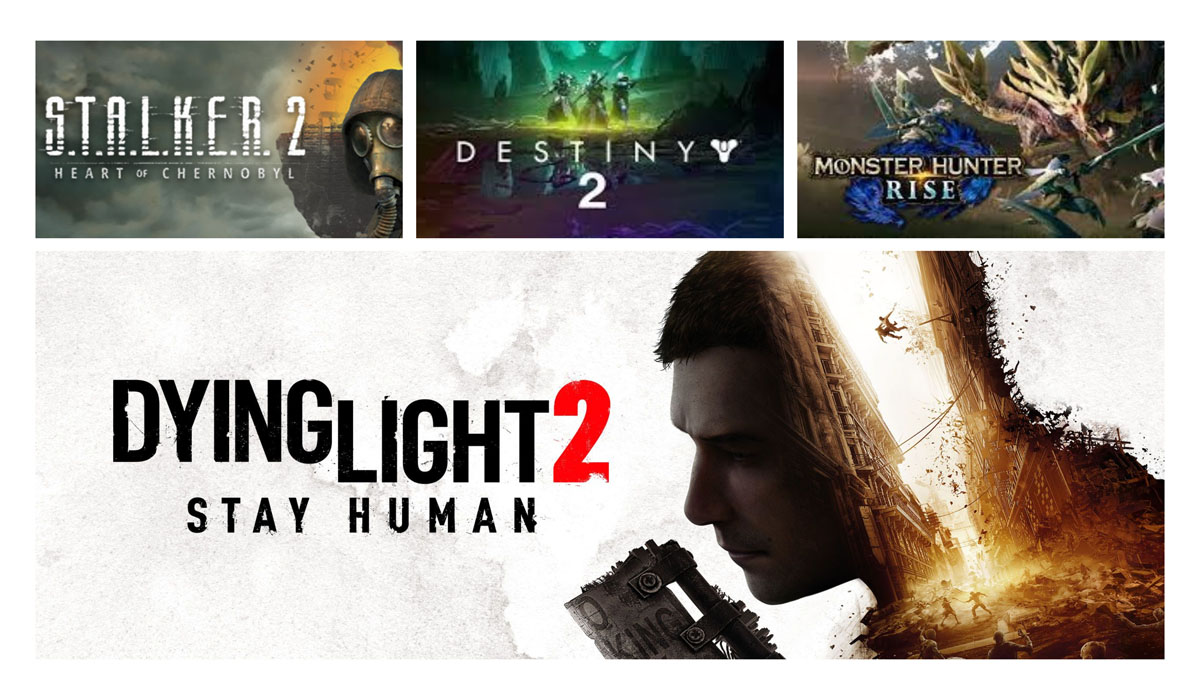 This year may not have been the best for gaming in general, but as 2021 is nearing its finale, 2022 promises to be something different. We have seen a lot of great titles being delayed, but fortunately most of them are going to be released in 2022, potentially making it one of the best years in PC gaming ever! There are going to be mentions for all types of console generations current and upcoming such as new games for PS5 and also some new games for xbox one. So with this in mind here is a list of the most anticipated games of 2022;

We start with a major bang, as in February 2022 we’re expecting one of the most covered games of recent years - Elden Ring. It will arrive on February 25th, ending the 2 years waiting from the whole gaming community. Recently it was announced that the game shall be delayed from its January date to a next month one, in return fans are promised more exclusive footage and trailer, and again it is a short delay. The new action RPG by FromSoftware.inc is obviously the heir of the Dark Souls series but it also comes with some remarkable innovations, being the first game of its type by the Japanese team presented in the open world format.

But this is not the only action role-playing game coming in the beginning of next year for the fans of this genre. In Monster Hunter Rise you can face fearsome monsters and reach new altitudes, having to scale cliffs and some very high structures. Also all combat areas available within the game maps are connected to each other without interruption of gameplay. Battles look really epic and intense in this one since some of the enemy creatures are much bigger than your hero! There are many weapons to use and ways to commence an attack to approach the different beasts, and as we have seen in trailers so far you could even ride a dragon yourself, so stay on the look-out for this title.

Without a doubt the next game on the new video games coming out in 2022 list deserves your attention, especially since it does not have a precise release date yet, but still it is going to be in the first month of 2022. We eagerly expect the release of Tom Clancy's Rainbow Six Extraction , so even shooter enthusiasts are going to have their preferred title to buy at the beginning of the year. It is action packed, full of gadgets and lots and lots of spiky, exploding and covered in black goo foes, as you progress through an extraction mission to save one of your own.

We continue our suggestions for upcoming video games releases for early 2022 with a very prominent survival horror that will occupy a pretty hefty amount of hours from your life, that will be none other than Dying Light 2: Stay Human. The large open world game that takes us to Villedor’s secrets, memories, and complex characters as early as February 4. The last trailer of the installment showed Lawan, a character played by Rosario Dawson. She is a warrior, a strong and determined woman who knows how to survive in a world of collapse and full of dangers, who wants to take revenge at all costs on those who betrayed her. As a whole it is shaping up to be such a major title from the top new video games 2022 category. The thrill is immense with this one! So let’s just go to the next one because our praise could not be enough here.

The King of Fighters XV comes as our pick in the fighting games genre as the historic SNK series will arrive on the market in mid February, 2022: this is a somewhat niche game, but it cannot be said that it is a lesser title, considering the history that it carries with it and the importance it holds within its own genre. This time there are going to be 39 characters including some familiar faces from the very beginning and origins of the series, going through a number of fan favourites that are all now going to be playable in the same game, as well as newly introduced ones who are directly linked to the plotline in this edition of the KOF tournament. A thing to point out for this one is the return of 3 vs. 3 mode and some brand new mechanics that are elevating your potential for much better combos and a variety of super charges to go beyond any previous installments.

A few days later, Sifu will also arrive, a widely covered title, but not at all superfluous, being from one of the most prominent indie studios on PS5 and PC - Siloclap, coming from the authors of Absolver and is going to come out on February 22. Sifu aims to show martial arts on an entirely new level in the video games industry. It may not be among the most anticipated games of 2022 but it delivers an extra smooth fighting gameplay and flow mimicking a classical kung-fu movie. We definitely recommend to give it a look and see for yourself if it something you would fancy trying.

Destiny 2: The Queen of Whispers is also scheduled to arrive on the same day, a new maxi-expansion of Bungie's MMO that will surely keep the large community that gravitates around the title busy for quite a while. Mixing elements of sci-fi with adventure it just has a different feel to it. It is introducing new an array of new concepts and mega weapons to serve the Guardians into the vast universe the game has accumulated. The plot twist this time offers a clash between good and bad versions of the Guardians really takes things in new directions. It will come packed with many goods since the company is having a 30 year anniversary, so they have promised presents for everyone in this addition.

Saints Row , the new reboot of the series got announced during Gamescom 2021 and presented an entirely reconstructed version not only in the graphics department, but also well into the history and contents, and is said to arrive on February 25, 2022. The clips took us for a walk and a ride around the city of Santo Ileso. The first pre-alpha trailer showed that the streets are quite deserted and the sound design isn't always up to par, but considering the game isn't even in beta, the first impression is definitely a positive one and we are flagging it as “High priority” on our most awaited games coming out in 2022 list.

Among the certainties of March there is one of the biggest surprises that emerged during Gamescom 2021 - Marvel's Midnight Sun . It’s a new turn-based strategy developed by Firaxis that aims to stage something truly new: a strategic RPG on Marvel super-heroes. We spotted some of the most iconic heroes Marvel has to offer in special team adjusted costumes which looked fantastic to us. Lots of customization options are going to be included in this title and when we think of the roster it includes the Avengers, X-men and many more. Establish great connections and interact with the various opposing forces of Lilith. The game rewards strategic thinking since it will integrate a tactical combat with many possible combinations to proceed in battle, taking place on some very famous landmark locations in the Marvel universe. So select a team of your favourites that usually roam far apart and bring them together for a completely new experience of teamwork.

Another sure bet of March is WWE 2K22, which should not suffer further postponements and remains a game that is particularly awaited by the community of pro wrestling fans. It is the 26th installment in the series and the 9th one published by 2k. With 22 of the main WWE stars being confirmed to be in the game so far, and many more names expected to be introduced in the coming months, it is going to be packed to the brink with high-profile talent.

Another one of the most awaited games coming out in 2022 is on March 18th, Stranger of Paradise: Final Fantasy Origin is going to start entertaining all the fans of the Final Fantasy franchise. The action role-playing installment developed by Team Ninja and published by Square Enix will introduce a storyline with a set of warrior characters brought into the beautiful fantasy world to face the malevolent Chaos and rid the world from the clutches of darkness.

At the end of March another title from 2k is coming to market, Tiny Tina's: Wonderlands is going to take us to a reverie world under the threat of the Dragon Lord, who wants to rule over all the Wonderlands realms. Will you take on a magical journey to stop him? Being a world of Metal & Magic (and also guns, lots of guns in a fantasy shooter) it also encourages us to shoot at anything that moves around in combination with witty humor while doing it.

The month of April will hit us with a game we have been waiting for 11 years - the proper sequel of S.T.A.L.K.E.R.: Call of Pripyat. Yes, we’re talking about S.T.A.L.K.E.R. 2: Heart of Chernobyl , which will bring us on another adventure in an open world with supernatural terrors on April 28, 2022. The first gameplay trailer takes us to a place inside a ruined school in the ghost town of Pripyat with an extremely dangerous environment, where we meet the new protagonist called Skif, a code name for a sort of recruit who has an extremely important future for the entire Zone.

Another Long awaited release in the list of most anticipated games of 2022 - LEGO Star Wars: The Skywalker Saga is destined to happen in the Spring of 2022. It will feature the largest roster of playable characters from the LEGO Star Wars series so far. It is going to also include the greatest legends from each era of the Skywalker saga. Players can battle against the evil forces by playing as different heroes like Luke Skywalker, Rey, Obi-Wan Kenobi, Finn, BB-8, and a complete legion of other characters. Alternatively, they can switch to the dark side, taking control over Darth Vader, Emperor Palpatine or Kylo Ren as well as other dark side users. The largest vehicles in the entire galaxy will also be available for command. Players can experience some of the most famous scenes from the films such as light speed jumps in the fan-favourite Millennium Falcon to outrun Imperial spaceships, fight off First Order TIE fighters in Resistance X-Wings, or fight on the Death star all in the familiar LEGO style.

The Spring season of 2022 is the time of release for yet another game of the Warhammer series. Warhammer 40,000: Dark tide , which is set in the Hive City of Tertium on Atoma Prime. Though originally under the control of the Imperium of Man, Chaos has scourged the planet and turned it into a cesspool of corruption. As a recently freed prisoner, the player joins the Inquisition to overthrow the invasion forces. Expect a lot of fights of grand proportion with multiple enemies spread all around the areas you must go through.

So brace yourselves, as the beginning of 2022 appears even a bit crowded for all gaming fans, who will find themselves with a considerable amount of titles to manage with in a relatively short period of time. All this, of course, without considering the possible delays that could change the calendar again, but we are really hoping there will not be many such bad surprises. So these were our top picks for what new video games are out during the initial months of 2022, we tried to assemble a list that could cover all major genres so that there is something interesting and captivating for all gamers across the board as well as consider some new games for PC and not only consoles.