The joy of sale is ending tomorrow! Last chance to buy on a discount!
Login Customer Support All Products Bestsellers
Profile
My Wishlist My Library My Orders Account Settings My Affiliate program My Tickets
About YUPLAY
About Us Terms & Conditions Privacy & Cookies
Community
Yuplay Blog Affiliate Program Frequently Asked Questions Contact Us 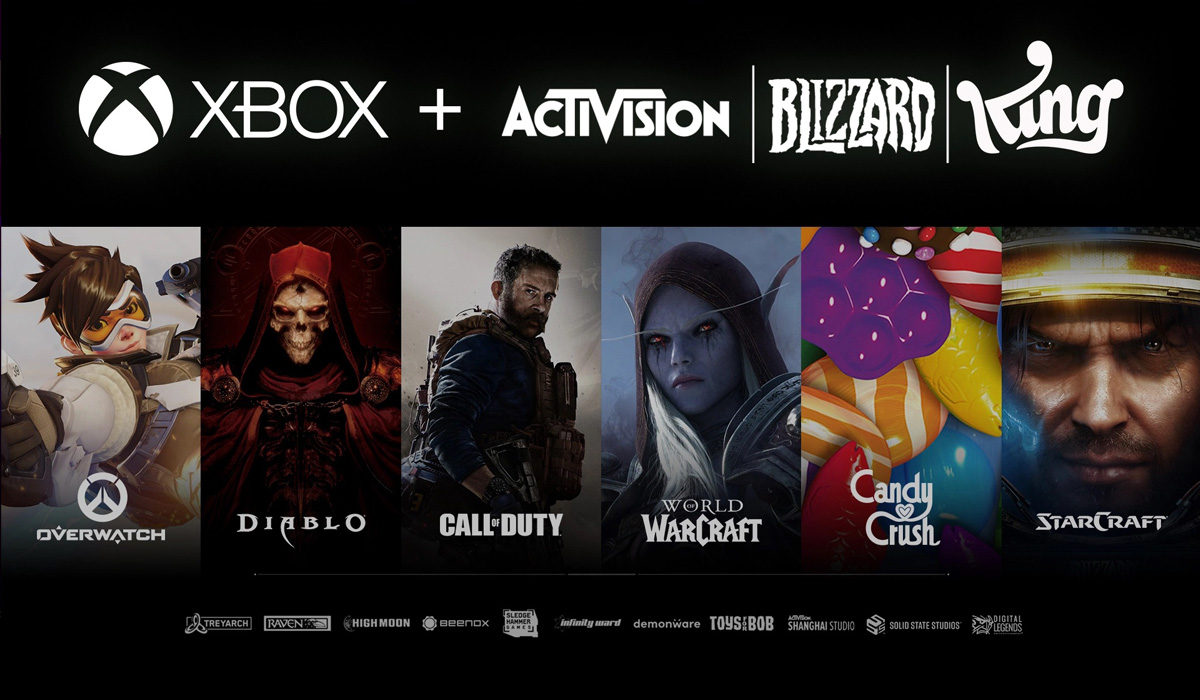 One of the most interesting news going on in the gaming industry since the start of the year was the official announcement of the intention of Microsoft to buy Activision Blizzard. Lately the software giant has been on a gaming studio buying spree looking to gain new and exciting assets for its Xbox and Game pass platforms and trying their best to surpass Sony in the exclusive titles department.

So, how much did Microsoft buy Activision Blizzard for?

This deal is hands down the biggest ever for the gaming market in numbers, magnitude and transfer of massive game titles, as the evaluation points at Activision Blizzard to be sold at for $65.50 billion.

When comparing the market share it turns out that this shift could disrupt the whole industry and set Microsoft in the leading position on both the console and PC markets, presuming that everything goes smoothly. In order to understand the current situation, we should have a look back at some history and establish why did Blizzard merge with Activision in the first place:

Dating back a few decades the history of Activision has been always pushing the limits with creative ideas and classic titles, setting bars high in spite of other rival companies such as Atari. After numerous acquisitions of prominent studios such as Red octane and Vivendi it grew into an even bigger power-house as it later got control over Blizzard Entertainment too, which at that time was a company with a string of different names before getting well-known as a the fierce snow storm phenomena. Everything took off for them at first with the release of their Warcraft franchise and then their next prominent hits in Diablo and Starcraft, but nobody expected the grand success of the World of Warcraft that is still around and kicking years after release. From their astonishing success the company grew and not only doubled, but actually quadrupled in staff and capacity. Having noticed that Activision knocked on Blizzards doors and offered new exciting routes to success, if they agree on a merger; thus Activision Blizzard headquarters was arranged for and established in Santa Monica, having a plethora of worthy titles including some of the most popular games up to today. With such a combined catalogue it is definitely an attractive investment, or is it?

During the last few years (2018-2021) the road has been quite bumpy. Activision Blizzard news have lately included a multitude of disasters.

Controversy has sparked many internal scandals. Fan criticism has been on the rise, since bad decisions have been made for the company and its IP products, as well as the poor staff management that led to some vacancies on key structural positions, and to top it off even a state investigation over some of the cases was held by authorities causing Blizzard Activision stock price and support to drop significantly.

So would the brand be able to return to glory? Is this the beginning of a new stage with a trajectory for growth and reaching new heights, or would it bring on new problems and backlash from the masses?

Microsoft’s main interest is in the expansion of their exclusive library with a variety of big titles that have a strong (in many cases cult) following and even though Activision Blizzard’s image is a bit tarnished we could expect it to be cleansed and garnered in case Microsoft acquire Activision Blizzard and their IPs. As in previous examples of such similar and notable deals have demonstrated, Microsoft has always tried their best to take good care of things thoroughly and fuel with resources and staff any studio or title they get secured and own the rights over.

An example to point out on that would be when Microsoft bought Minecraft and the studio behind it Mojang in 2014. In case you are wondering how much did Microsoft buy Minecraft for, the right answer would be $2.5 Billion, meaning that when Microsoft want something, they are more than capable of pouring the right amounts of capital and money is not a problem. At one point they wanted to dominate the gaming world so much that there were even attempts at Microsoft buying Nintendo that have not been successful.

This year’s big merge certainly could mean a variety of things in general; we are already getting slight rumors of a new survival game that has been in the works, and could further expect some new titles to be announced, as well as multiple polishes and reworks over already existing franchises or increase in production capacity, but are there spearheading projects that we could point out to coming out in the near future?

Currently one of the most anticipated franchise sequels that have lots of attention turned onto it, is Overwatch 2. With already a few delays, it is expected to land sometime during 2023 and to improve on the formula set in its predecessor, as things were getting too chaotic and imbalanced in the original. However, a few new mechanics and a fresh re-paint might not do the trick and the company should up their game and performance if they are to soothe fans’ aches and pains that have generated over the last couple of years. In-depth analysis would be necessary and possibly hefty amounts of fan service to heal that open wound.

It has to be mentioned that there has been a recently announced survival first-person perspective game that seemingly has been in the works for the last couple of years (possibly from late 2017). Information on that is still scarce and would probably be emerging to grab the spotlight attention in the coming months, as the studio has not yet ventured into this genre that much. So far we know that it is set in a fantasy themed world and that it is a place full of mighty heroes for the PC and console market. It mostly got on our radars since the studio looked for an array of multiple developers and a long list of staff they are on the lookout for.

Another thing that stuck out was that there were some openings for mobile devs too. This might align well with the current events of the Microsoft deal, shifting some resources towards integrations with the mobile-gaming market and opportunities related to expand the titles on more platforms such as Android and iOS. It is surely a risky move, as the track record for fan reception regarding some of Blizzard’s known titles and attempts for mobile transition in the not so distant past, have not been met with overall enthusiasm in the fandom. Nowadays, mobile gaming matured, got a bit more advanced and most importantly has been improved upon, and a shift like this could not sound that far-fetched as it did back in 2018. Staying contemporary and relevant is of great importance in the field and all of the companies and parties involved in the biggest deal in gaming history are proven veterans with lots of experience under their names, so we should wait and see what things they could compile when working together.

As for our team, we are going to keep you informed on any further news related to upcoming titles and announcements all throughout the year, so that you stay informed and in-the-know about the outcomes from this contract.