The joy of sale is ending tomorrow! Last chance to buy on a discount!
Login Customer Support All Products Bestsellers
Profile
My Wishlist My Library My Orders Account Settings My Affiliate program My Tickets
About YUPLAY
About Us Terms & Conditions Privacy & Cookies
Community
Yuplay Blog Affiliate Program Frequently Asked Questions Contact Us

The Renowned Mega Man Battle Network Series Is Back 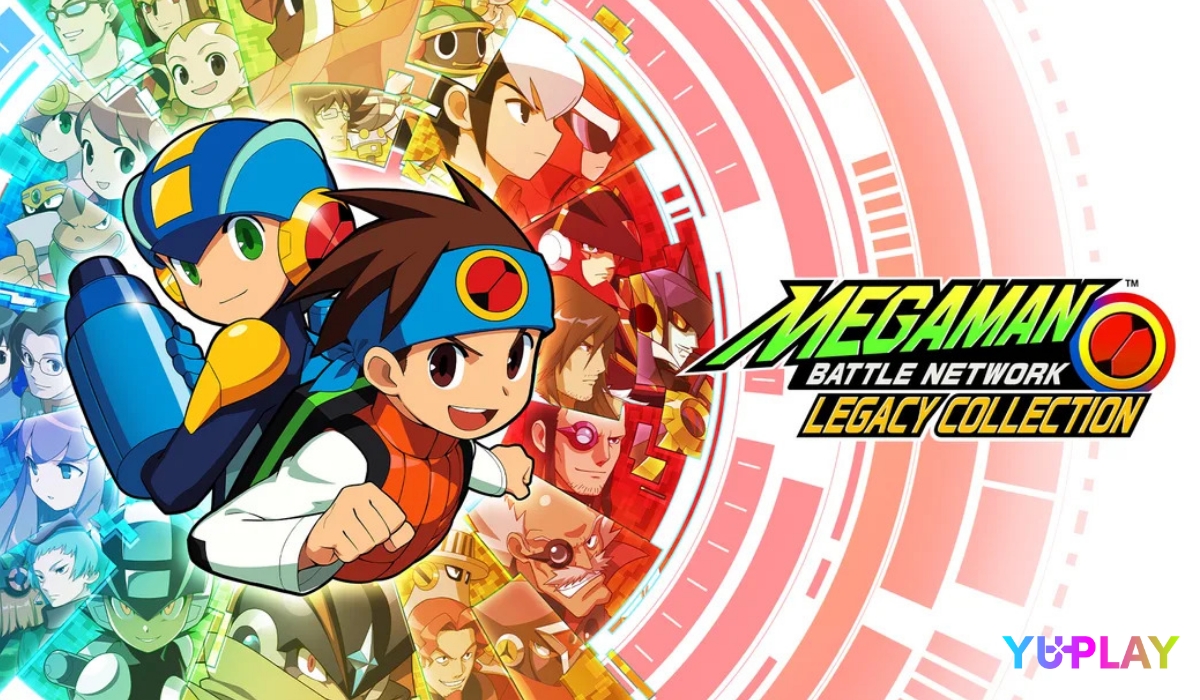 One of the most beloved Capcom series has just gotten a new full collection pre-order campaign a few days ago – of course we are speaking of Mega Man Battle network Legacy collection that includes all the original mainline titles plus each of their alternate versions with a lot of improvements and new features all-in-one. A pack with a total of 10 games awaits all the fans of the franchise next year, with an announced release date of 14/04/23.

For this occasion, we decided to have a more in-depth look at the Mega Man Battle Capcom series and review what new and cool things are added in the pack!

Ready? Prepare your Navi and let’s go right in!

Where it all began – The roots of Mega Man Battle series

The Mega Man Battle network series started all the way back in 2001 as a portable handheld game for Game Boy Advanced with a plot surrounding the Battle Network established in an amazing high-tech world.

You play as Lan Hikari – a 6th grader and resident of the ACDC Town in Den city. Even though he was far from brilliant at school Lan is incredibly skilled when fighting viruses in NetBattles alongside his trusted Navi – Mega Man in the cyber world. The storyline branches from the original Mega Man games and takes this beloved character on a new journey in order to find out the goals of a mysterious organization named WWW.

As this was the game that introduced the new generation of gamers to the franchise, the title captivated the hearts of many as it combines elements from an action-RPG and card battle games that include the characters in the Mega Man universe. It is not in the so far familiar 2D and 3D settings and has a completely different style of gaming. You battle on digital 6 x 3 grids against viruses and enemies from all corners of the digital world and collect powerful chips that allow your skills to become stronger and more powerful.

The title was very well accepted and from then on the Mega Man Battle network series has only grown in popularity with many following additions. So let’s have a quick look at them as well, shall we?

The sequels and different versions that followed.

When the game had proven successful and with an interesting new feel to the character, the formula began expanding and new titles all with a variety of features were released through the years that followed. Each one expanding on the previous ones and giving more and more gameplay styles, forces and chips at your disposal. Many of them explored two versions and subplots where you could go on separate adventures, meeting many new characters on your journey.

In the direct sequel after you have defeated WWW you go against the Net Mafia Gospel that has now emerged as the big shadowy organization to battle with. You also get the Style Change system, which allows for a more diverse approach when going into battles. You get various boosts and capacity depending on your battle style and are separated in four aspects – Heat, Aqua, Elec and Wood that offer you different charge shot stats.

The third installment in the Mega Man Battle games was the first one to come in two different versions – Blue and White! One of them faces you against Dr. Wily and the now resurfaced WWW, but in the other you explore the past of another Navi – Bass! It is here that you receive the Navi Customiser system that allows your character to gain certain abilities while strengthening it through programming and multiple configurations, but be really careful as faulty combinations might end up in buggy performances.

Number 4 on our list is Mega Man Battle Network Red Sun & Blue Moon – another two version game which sees Lan entering a completion to determine the best NetBattle warriors. Again, there is a dark plot that unfolds as you master new skills that allow you to incorporate elements and abilities by already defeated Navi’s from the tournament making your skill set even wider. This mechanic is called Double soul and becomes active when Mega Man’s soul resonates with the souls of other Navi’s.

The fifth Mega Man Battle Network has the following versions: Team ProtoMan & Team Colonel in which you get assisted by characters from the aforementioned teams. It mostly stays true to the already established formula, but with new combos, environmental attacks and improved defenses. You go on a quest to search for Lan’s kidnapped father as Dr. Regal and the Dark Chip syndicate Nebula try to dominate the NetBattles realm. You have to go and rescue different parts of the internet. Nebula has made Dark panels that are going to block your progress, but with your team you are able to liberate these sectors and defeat the enemies lurking inside them.

The last entry - number six comes in the form of Mega Man Battle Network 6 – Cybeast Gregar & Cybeast Fazzar. It introduces the Cybeasts that are mighty enough to defeat WWW once and for all. Use the Cybeast powers to reach new forms of battle with Mega Man as he transforms into immensely powerful cyber beasts that could crush anything on their way. Lan overpowers Dr. Regal and the Dark Chip Syndicate Nebula and it finally seems like the world would find peace at last. It is a more personal story as Lan adapts to normal life once again and is looking for his upcoming adventures.

Now that we have discussed the entries of the series, let’s have a glance at the new features that Mega Man Battle games will include:

New high-resolution filters - Improve the graphic quality of all the games in the collection and enhance your experience to new heights. No more edges and blocky look, but if you are a fan of the original graphics you are free to revert back to them as this option is able to be turned off at any time.

3D Mega Man PET screen – Standing as short for “Personal Terminal” the PET screen is going to provide you with interactive Mega Man avatar that is able to perform many functions and shortcuts to games, galleries and much more over the network. With the pre-order offer you also get two unique 3D PET screens.

Official gallery – with tons of exclusive original artworks, illustrations and concept art, as well as rare designs and “Mystery Data” for a total of 1000 works of art that has been included in the collection.

Music player – Get access to 188 original tracks and songs from all over the games in the Mega Man Battle Network series. Listen to your favourite ones as menu background or use the interactive player on the go. Pre-order the collection to receive 4 special arranged exclusive tracks to the player.

Downloadable chips – Load Chipdata from different events with unique features and abilities to help you on your quests.

Mega Man Battle Multiplayer features – create and join private or public matches against other players and test your skills all over the NetBattle. You are also able to trade and/or compare your collection with other online players.

As we mentioned earlier the Pre-order comes with many exclusives and you get all the entries in the collection plus the special PET screens to change the appearance of Mega Man in the HUB or DARK styles as main skins. There is also going to be a VOL.1 and VOL.2 options at Mega Man Battle release and the Mega Man Battle steam launch next year. The collection is going to drop on the 14th of April 2023 for the Nintendo Switch, Playstation 4 and PC (Steam).

In conclusion we are going to only say that we are pretty excited to relive some of our favourite moments in the Mega Man story and cannot wait to get our hands on the series this coming spring. What about you? Are you looking forward to getting your own Mega Man Battle Network copy?