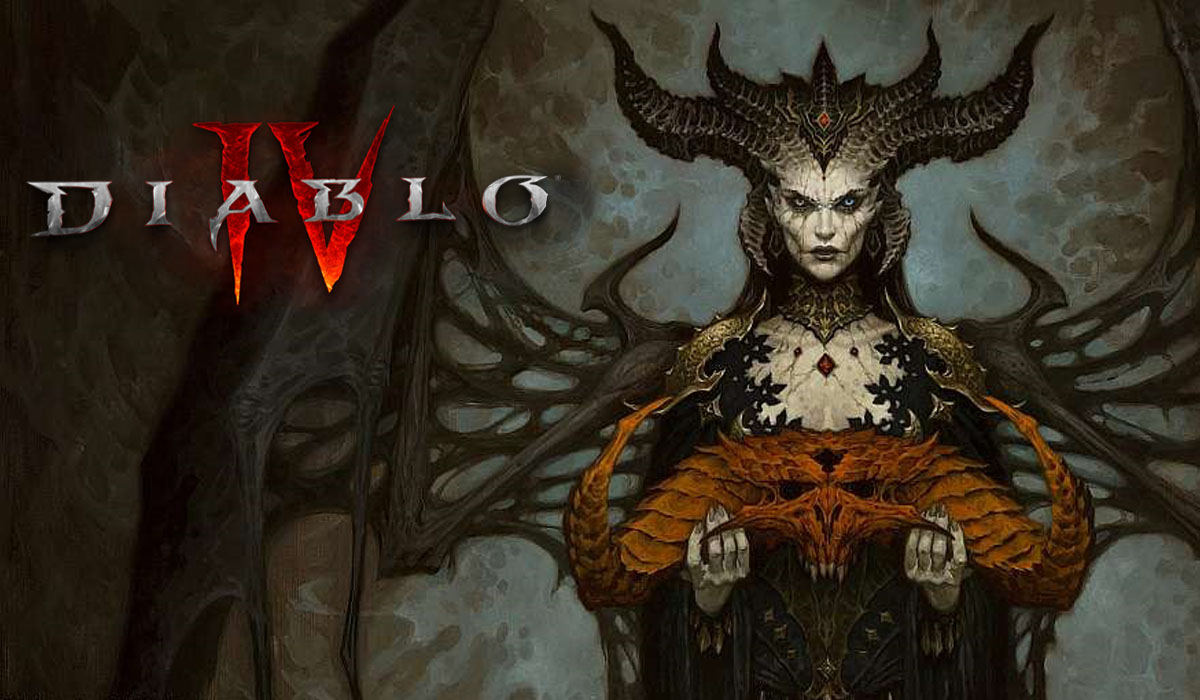 One of the more prominent BlizzConline 2021 blockbusters has certainly been Diablo IV . The event presented to the attendees a multitude of new details and Diablo 4 news, as well as a longer than four minutes reveal trailer of the new playable heroine - the Rogue, who is added to the roster alongside with the other three previously announced Diablo 4 character classes - the Barbarian, the Druid and the Sorceress.

The Diablo 4 trailer shown during the BlizzConline opening ceremony introduced us to a dark and gloomy Sanctuary, where we could see a woman entering a church in Akarat. She joins the priest in prayer, repeating his words for some time but when being asked of her sudden visit she responds by explaining she is trying to confess for her sins of being a thief that has dwelled into some more serious and vicious crimes than that. The story goes into visual details and this is the way through which we get some glimpses of her background and origins. She starts describing her initial start as a thief that was robbing the more fortunate people than her and then transitioning into depictions of gruesome acts and violent battles from recent past events that she committed, for each giving to the priest three severed ears. This offering did not seem to surprise or shock the man too much at all. Her views are sinister, her ethics are questionable and she feels no remorse from her evil deeds, she even expresses prideful thoughts on doing the job so well and as a true “professional”.

The man then whispers a mysterious name (that we do not hear and remains a mystery for now) to the Rogue, who then leaves the church ready to fulfill her new mission. Then we get some exciting footage of various cuts from the Diablo 4 gameplay where the Rogue is demonstrating her vast abilities and play style. We see her engage in close combat as well as some more varied combinations. The most impressive feature for us is her speed and a very obvious agility capacity. Then we return to the cinematic part of this Diablo 4 trailer showing the priest picking up the severed ears and placing them in a case hidden from the eyes of the world, where we actually see a collection of even more ears is stored.

Welcome back to the dark universe of Diablo!

One thing becomes clear right away from the start - Diablo IV has completely set aside the colorful atmosphere of the previous Diablo III installment. The fourth chapter of the saga is much less "lively and vivid" than its predecessor, which is in fact a really awesome return to the true origins of the series and its roots. It is dark not only in its topics or subject matter but literally the atmosphere feels as just the right amount of loom to get you chills from! The creative works of Blizzard Entertainment show how much attention to detail has been involved in this new Diablo game . All the released cinematic footage and Diablo 4 gameplay previews have shown a deep story revolving around new barren worlds, hellish landscapes and the mysterious secrets of the rise of evil which the already familiar and newly-introduced Diablo 4 character classes should face up with. So let us return our attention back to the newest member among them;

The Rogue character has most probably been inspired by the Assassin of Diablo II and the Demon Hunter from the third chapter reaching a good blend between the two. She is presented as relentless and fierce, incredibly fast and agile, as well as having an abrupt and dynamic set list. In some previews she dodges projectiles with ease and in others she performs an aerial dive with a barrage of dark energy arrows raining onto the enemies in the battle. Her dashes are deadly and the close range combat skills make sure she is a really difficult target to keep in place. Another interesting thing is her familiarity with shadow magic and poisonous substances that make her an even more versatile character, with lots of combo linking potential on different ranges and rapid movement control. In other words, it is advisable to stay on the move and attack from different directions, confusing the various demons and creatures you must kill.

If you decide to select the Rogue your main weapons would be a plethora of bows, daggers and crossbows, giving you the opportunity to alternate between some very lethal melee attacks and poisonous shots covering the screen. You will also be able to develop your character in three distinct classes - Combo Points, Shadow Realm and Exploit Weakness: the first of which would focus on chaining shots in sequences, while the second is going to allow you to bring your opponents into a parallel dimension, within which you will be almost invulnerable, but they most certainly will not have the same luck! The last option - Exploit Weakness relies on a counter-attack mechanism as soon as a red indicator appears over the head of a particular enemy. A great, solid addition to the Diablo 4 characters list in our opinion. The developers have implied that they have listened to fan feedback a lot over the years and are working on more complex skill trees for all classes, which would bring various new mechanics in the path a player can take the character in.

In this new Diablo game you are going to have the ability of creating and designing the character's appearance from scratch, so you can select different attire and add tattoos, scars and so much more. The customization opportunity does not end at just the start but could continue over your progress as you would be able to shape up the outlook of your Diablo 4 characters and make yours look unique and different. The team has stated that everything you edit is going to be reflected in the cinematics too, so that you YOUR character is the star in all of them. The foes have also gotten improved look and there are some familiar ones that players would not be surprised are returning again, but looking better than ever before.

There has been a lot of effort has been placed in the direction to make the game more geographically diverse too and you would often climb rocks or jump over fallen off bridges in 4k detail. A horseback ride is also in one of the cuts and probably is included for faster movement across long distances. This shows that the world has expanded and player could expect bigger maps with lots to discover and plunder for.

Accepting and consequently completing specific missions will give you a taste of the "narrative line", which will vary based on your actions, strategies and the type of approach you have towards the game, but the really exciting thing in Diablo IV is the open world that could go far beyond the classic open world settings seen in similar games: the player would be able to freely roam and explore the various regions, starting missions and objectives in any order they find suitable or might prefer. Just be warned that this freedom also comes with some negative sides - it may lead to excessive dispersion in a multitude of exploratory phases and even perhaps get you a bit lost if you do not keep track of your progress.

Nevertheless, the developers have made sure that the Sanctuary will be a place where everything is connected well enough. Furthermore, the Diablo IV universe will bring dynamism of events that we have never had the opportunity to witness before in the series. Just a quick example of this is the presence of different and unique Camps: they are outposts that have to be "purified" from the forces of evil. Some other locations include Scosglen consisting of deep woods that few ever come back from to tell stories due to their local habitants, isolated and distant rocky regions covered with ice as the Fractured Peaks that actually contain immense horrors beneath them, the Dry Steppes where water is more precious than life for some of the brutal mercenaries and blood mages dwelling there and Hawezar which is a deadly poisoned wasteland that seems attractive to only those seeking torturous death. Kehjistan is the last known so far region to mention that has been grounds of numerous demonic invasions leaving it in utter ruins and a vague memory of its luxurious past. The Diablo 4 gameplay looks really well and could last for between 20 to 30 hours of intense battles which should be enough in order to get to the end of the game, but these hours are definitely going to increase in number if you decide to continue your journey even after the end of the main quest and do some side tracking around the open interconnected world. So far it looks like the big bad is going to be Lilith – Mephisto’s daughter who has returned from her exile to lay havoc, chaos and destruction after a sacrificial blood ritual performed on three marauders looking for riches and tempting knowledge of the dark powers. They got to witness her reincarnation just as she was formed in a mantel consisting of their collective blood ripped from their bodies in a triangular and ornamental shape.

Yet another novelty is the fact that Diablo IV is going to also have a PvP and PvE modes included right inside the main game maps. These events will occur and take place in specific areas called Fields of Hatred, where “the hatred of Mephisto has been bubbling up from Hell.” When you enter in these zones, you can choose to show yourself as a Hostile or you can remain a noncombatant to just observe and go around without interferences. Unless you flag yourself as Hostile, from performing lots of kills, other players can’t attack you, so you can safely explore the area and even farm for Shards of Hatred, which is a type of cursed currency that needs to be purified at alters spread around the level and is to be spent at the local merchants in order to buy weapons and various objects of importance or just building your inventory. So with all that said we have just one question in our heads right now:

When is Diablo 4 coming out?

Although the game was announced back in November 2019 there has not been a confirmed and official Dablo IV release date as of yet, there are probably going to be many more new introductions and teasers on the way, but hopefully it would be out in the coming year. The Alpha and Beta testing phases are available for sign-up on the official website, which in its own acts as a representative hub of what to expect from the game. A Dablo 4 Pre order might be announced at some point during 2022 too, so we are going to keep you in the know about that one for sure! The game has been confirmed for PC and most current consoles such as PS4. Xbox One but there certainly are rumors going around of possible releases for the next generation series as well since there has not been a concrete release date.

To sum everything up, the new game dynamics we mentioned, the incredibly high versatility of the Rogue character, the challenges of the multiplayer options, as well as the return to the dark pastel tones from the past, is all we have been waiting for and the developers have done their best to provide it in such a detailed manner. Our team is going to continue to follow all the Dablo 4 news as they unravel over time and we are definitely looking forward to find out what other secrets the developer team has in store for us. We hope that this Diablo IV review has helped you shed some light on this grim and filled with darkness world that we have been exploring for decades now.