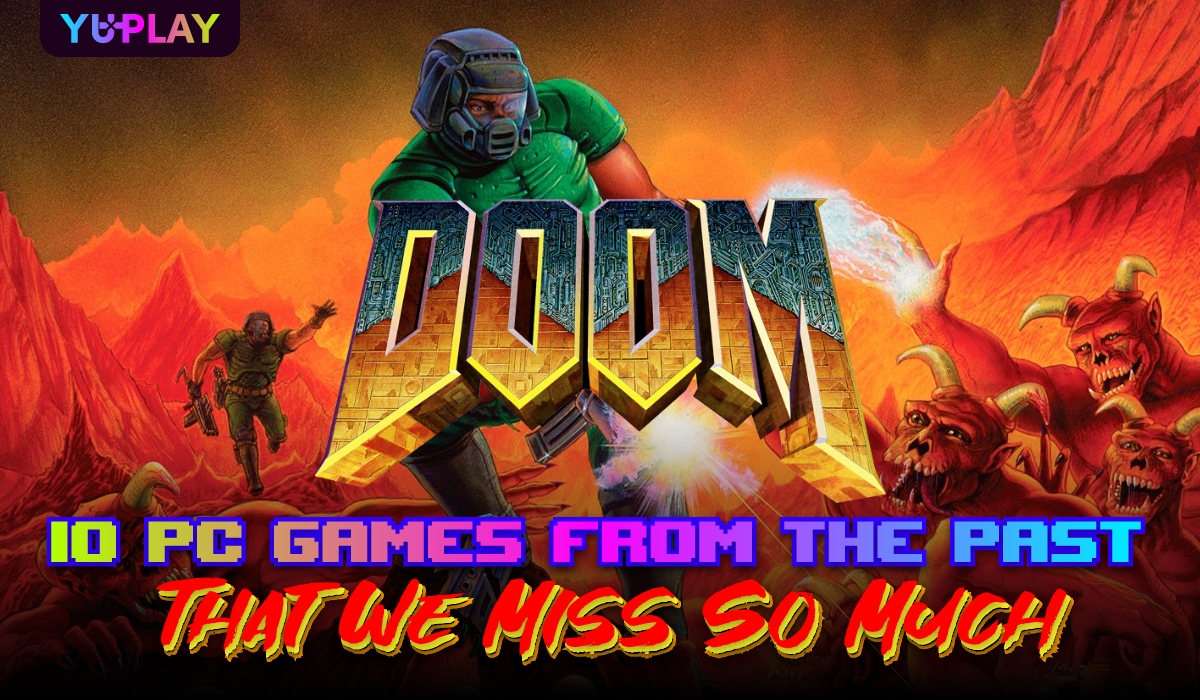 Which are the most prominent PC games from the past that we remember and love so much?


They are a part of our childhood that is always going to bring us nice and fond memories because we got to discover the incredible world of 90s gaming. Back then that was something very new to everyone and the landscape looked much different to what we got today, but without some of these classic video games there would not be many of today’s outstanding titles and gems. That is why we decided to have a look back at some of the GOATs in old school PC games that really made an impact that is felt and echoed even up to today.


Some of the titles are still well and kicking, with sequels or remakes that continue on the legacy and others that have passed the torch and defined the genres in their own way. Plus it would be a great reference to retro gaming and how to play classic arcade games on your PC for any players out there that did not experience these groundbreaking titles. Ready? Let’s go!


No list of games from the past would be complete without the original DOOM game. With its 5 difficulties intensity and sheer brutality that game perhaps single-handedly blasted the 3D Shooter genre up in the clouds. It has a distinguished feel, great soundtrack and action-packed levels covered in various symbols and monsters all over the place. Having improved on their formula from Wolfenstein 3D (1992) but not yet reached to the original Quake (1996) – id Software were definitely the trendsetters that introduced and expanded on the gory shooter style. Can you survive the hordes of demons that would show no mercy and will shoot at you relentlessly?


This alien vs. military-styled sci-fi real-time strategy title is among the best old school PC games for a reason. Released by Blizzard Entertainment all the way back in 98, it introduced players to an exciting new universe where humans (or Terran as they are called in-game) had to battle with two other alien races. The Protoss – mighty technocratic beings that are able to convert matter into energy and vice-versa, having transcended the barriers of space they achieved a powerful unity with technology and the other ferociously opposing creatures the Zerg – gruesome and predatory beasts with a hive mind intellect that destroys and conquers anything that stands on their path of expansion. Each of the races and the gameplay have been balanced out so well that this game still inflicts awe in people’s minds.


Another quite worthy entry in the best classic pc games list by Blizzard Entertainment simply must be the original Diablo dungeon crawler RPG that spawned a franchise series that still roams the depths of hell and beyond to defeat the mighty beast that tortures the world of the kingdom of Khanduras. A group of heroes from different warrior classes are available to you and picking would seriously affect your experience with the title as they all possess different mighty powers and feel very differently to play as. The story is very interesting and the themes are well-designed and blended with the gameplay, so if you haven’t experienced the morbid realities in Diablo, make sure to do so as it is a must.


Having to protect your assigned castle and power-up a glorious hero that would maintain your armies of various deadly beasts and unique creatures to battle against other knights in order to conquer their castles and expand your influence over the different lands to gather resources from is very captivating. In this old school PC game you are required to think strategically and as a truly wise general and ruler that was responsible for their subjects, you needed to improve your stats, diplomacy, army and fortress as you may quickly fall off power if you are not careful enough. It produced a long series of games that continued and kept improving on the initial title as well as reworking some of the classics in HD.


Imagine constructing a whole city by your own design and liking with all the infrastructure and residential areas you want it to have, but they would be all placed in an isometric simulation. You start from scratch and develop roads, industrial facilities as well as public housing and venues. After you have a working economy and lively streets you must maintain and grow it any way you want. You navigate how events unfold through different scenarios and what problems you solve for your Sims (as the citizens of your city are called), you should keep electricity going, perform improvements on buildings, collect taxes and govern the premises so that crime levels remain low, keeping your population happy and peaceful.


Capcom certainly did a great job when they dropped the original Resident Evil action-survival horror game classic giving players the opportunity to dive in the shoes of either Chris Redfield or Jill Valentine, who are both elite members of the S.T.A.R.S task force. The team is being sent on a dangerous mission to a mansion outside of Raccoon City in order to investigate some bizarre events that have happened there. When you enter the premises you discover that the building is infested with zombies that chase you through the tight corridors and want to turn you into one of them. The fixed camera angles and tank controls sometimes work against you making the experience even more horrific and disorientating, which might actually be quite on purpose. It paved the way for the genre and Japanese horror styled games that followed it would never exist without it. Nowadays the grand story continues and also there are some up-to-date remakes that give it a new and modern feel.


Published by Lucasarts this old video game is one wonderful and fun title that really depicts the Caribbean pirates’ adventures in its own way. With a fairy tale style and comic book animation it engages you in conversations and situations with different inhabitants of the Monkey island, some more undead than others. You thread as one Mr. Guybrush Threepwood and his quest in becoming a pirate with great notoriety, and his humorous mishaps on that journey. Storywise you have many decisions to make and thus leading the plot in different directions, but you should be careful as danger lurks in many places around you, threatening to abruptly stop your career in the Piracy industry.


The first game in the Worms tactical game series with such a fun twist and setting that it just has an iconic place in the classic video games ranks. You play as a team of worms battling against another team of their species with melee and firearm weapons, such as baseball bats, axes, hammers and guns of all sorts, as well as specials such as air-strikes and nuclear bombs that devastate the level with more impact and cause more damage to your opponents, but also take away big chunks out of the levels in the process. This opens up the opportunity for environmental frags of your enemies sending them under water to feed the fishes, but be careful as the level sinks progressively as you put more damage on it! The formula proved to be so good and fun that it got multiple follow-ups and sequels expanding the arsenal even further.


Star Wars is an iconic franchise that has one of the biggest universal lores and vastness that is hard to be covered fully. When the race segment from the first movie of the prequel trilogy got its own unique game title it got received quite well, as it was not a typical car racer that takes place on roads and streets. It lets you control one of the many speeder pods with powerful engines that kind of resemble historic horse chariots from Roman times, all over the map of the galaxy, on a big variety of worlds from the movies lore. Another possible reason for the popularity of the title might be the impressive speeds that you are able to reach and how things move around you, making the game dynamic and very fast-paced. It might not be the best Star Wars game title ever, but we sure miss its originality and think that a current version would look and feel amazingly!


A Microsoft title that is one of those old video games that experimented and was also very different in terms of gameplay and offered some interesting innovative modes for players to enjoy that were not just simple track racing, but rather roaming the city to reach checkpoints on time trials as fast as possible, or carry and deliver valuables in a similar to capture the flag concept while other players try to stop you and retrieve the payload for themselves. It has a racing and combat element that make it stand out for its time and we had lots of hilarious moments when chasing each other on the streets of the city.


These include only some of our top picks for best old school pc games from the 90s that we enjoyed a lot and would definitely recommend to younger generations of gamers to consider if they want to discover what gaming was back then. They cover a wide list of different genres but we still could not fit all the entries we wanted to talk about, so you just might expect a Part 2 (or why not even more) for the list of old video games that are worth your attention, because that period was groundbreaking and paved the way for today’s evolution in gaming and we should be reminded of them often enough.