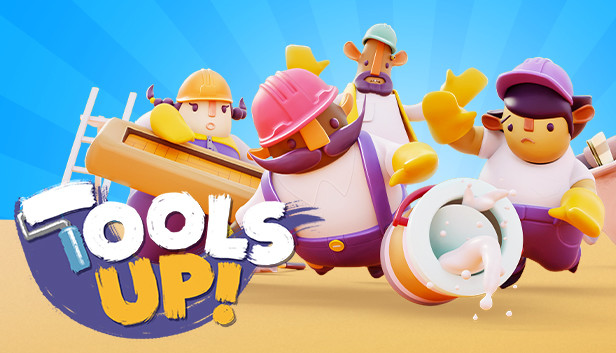 Gather your friends in this intensely fun local couch co-op game about home renovation and work your way to the top of a skyscraper in need of some work.

The owners of various apartments have left their homes in your hands. All they’ve given you is a blueprint of how their place should look. Cooperate with your friends to complete the task or make a mess trying!

Tools Up! is a local multiplayer game for up to four players. Work together against the clock and host a wild renovation party!

Join Tools Up Co.—a crew of renovators eager to get their job done—in its mission to renovate lots of unique apartments. Be the home improvement pro you always wanted to be. Be Tools Up Co.

Race against the clock as you renovate the apartments, chase delivery men and earn a star (or maybe even stars?) for each level! Complete tasks to unlock more challenging missions. Hint: teamwork is the key.

Throw things to people in other rooms or... throw people to other rooms! There are no bad ideas when you’re racing against the clock. Dive in the pool, slide on ice, and avoid lava streams. Oh, yeah–lava streams. It's so easy you won't be able to mess it up! Right?

Tools Up! will show you that simple controls and a Party Mode will party up every party! Unlock levels in the campaign mode and master them in Party Mode. So grab your controllers and remember the first rule of Tools Up!—work hard and play hard!

Tools Up! © 2019 Developed by The Knights of Unity Sp. z o.o.. Published by All in! Games sp. z o.o. All other trademarks, copyrights and logos are property of their respective owners