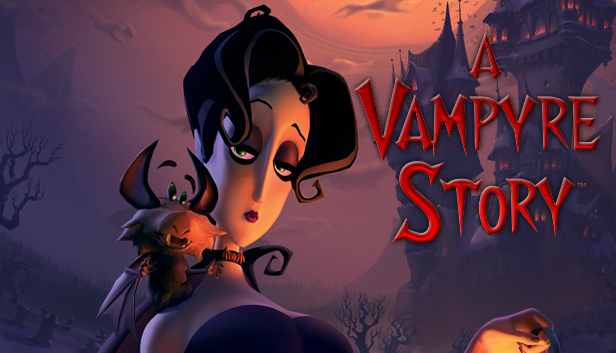 The point-and-click adventure game A Vampyre Story tells the tale of the beautiful, gifted opera singer Mona De Lafitte, whose life is brought to an abrupt end by a vampire baron named Shrowdy Von Kiefer. Henceforth, she is doomed to a miserable existence as a creature of the night in Von Kiefer's gloomy castle in Draxsylvania. Confronted with her seemingly hopeless fate, she decides to run away and try to fulfill her dream of singing at the Paris Opera. Accompanied by her mischievous bat Froderick, Mona must face a number of challenges in her odyssey and learn not only to accept her vampire nature, but also to use the abilities she has acquired to her advantage.

In more than 50 hand-drawn locations, the player's task is to guide Mona through Draxsylvania and to Paris by using his powers of deduction. Having a bent for extremely dark humor also helps... Along the way, Mona meets a wealth of partly endearing, partly frightening, but often just plain weird characters, including the inventor Dr. Riga Mortus, the gypsy Madame Strigoi, and Carpathia the wolfwoman.

A Vampyre Story has been penned by Bill Tiller, the founder of Autumn Moon Entertainment. A former employee of Lucas Arts, Tiller won himself a place in the hearts of adventure fans through his work on titles such as Steven Spielberg's The Dig, the legendary The Curse of Monkey Island, and Indiana Jones. A Vampyre Story combines modern 3D animation with the qualities of classic 2D adventure design and a highly unusual style which can best be compared with the works of Tim Burton or Edward Gorey.

All of this contributes toward making A Vampyre Story the first classic adventure for players of the 21st century, with the look and feel, humor and class of the cult graphic adventures by the Californian developer.